Skip to Content
Disclosure: We earn commissions (at no additional cost to you) if you purchase products from retailers after clicking on a link from our site.
107 shares

Fasten your seat belts, ladies and gents! You read that title correctly. Chevrolet is putting Wi-Fi into their vehicles. And, not just any Wi-Fi, but 4G LTE Wi-Fi!

Internet in your Car

Have you ever been on one of those painfully long road trips and thought how much more productive you could be if you just had Wi-Fi? That’s pretty much what I think every time I’m stuck in the passenger seat for longer than 5 minutes.

Jen and I drove to New York City from Chicago for BlogHer 2012. I can’t believe we survived. I’m positive it takes about 100 years to make it across Pennsylvania. It was on this trip that I used the mobile hotspot on my cell phone. Well, I forgot and left it on for a truly obscene amount of time. Thankfully, I had an unlimited plan, but when we got home my mobile company switched their plans around so the hotspot feature had to be paid for separately. I’m pretty sure this was all my fault.

But with Wi-Fi in the car we were able to tweet our location and find others on their way. We stayed on top of our emails and even drafted a couple posts! 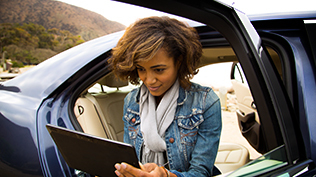 How would you use Wi-fi in the car?

I know the kids would be using their devices and probably streaming their favorite music. If I’m not driving, I’m always antsy to check a few emails. With the Chevrolet built-in Onstar 4G LTE Wi-Fi, you can connect up to 7 devices at a time! Chevrolet is the first and only car company to bring built-in 4G LTE Wi-Fi to cars, trucks and crossovers.

It should go without saying that only passengers or parked drivers should take advantage of these features. Safety first! 🙂 Here are a few other things I would do with Wi-Fi in my car:

Chevrolet is merging the physical freedom of the car with the virtual freedom of Wi-Fi to become the first and only car company to bring built in 4G LTE Wi-Fi to the largest vehicle line-up. Visit http://s.chevy.com/TBX to learn more.

This is a sponsored conversation written by me on behalf of Chevrolet. The opinions and text are all mine.

I think I would probably use Wi-Fi in my car most often to order food! How technologically advanced and cool!

I would love wifi in our minivan! I might just hide out there to get work done!

In-car WiFi is a great idea. My husband I travel to St. Louis and Pennsylvania a few times a year, and they're very long drives. If we had in-car WiFi I could Instagram, yelp, and use GPS without worrying about using up all of my data plan.