Skip to Content
Disclosure: We earn commissions (at no additional cost to you) if you purchase products from retailers after clicking on a link from our site.
77 shares 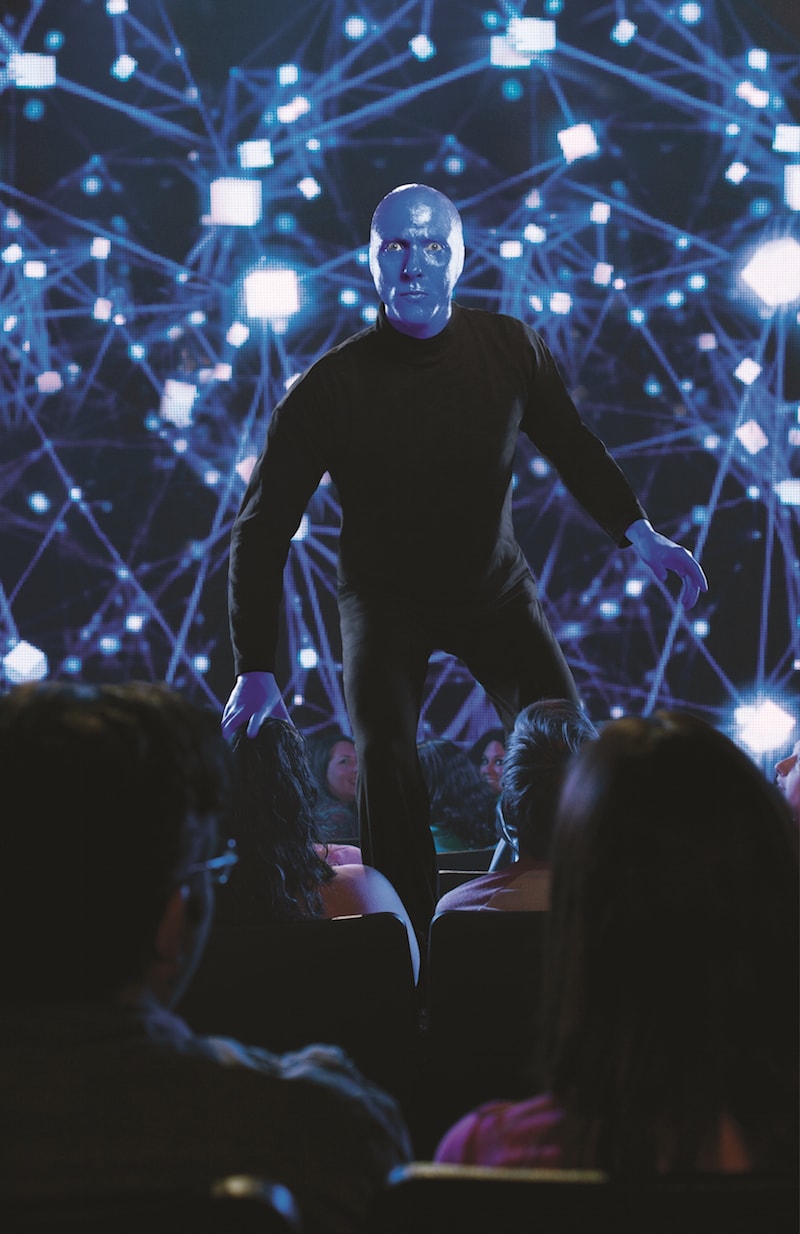 The Blue Man Group Chicago show is spectacular and worth seeing with any and all age groups.

I sat next to a man in his 70’s and my own kids–ages 12 and 15–and the enjoyment of all parties was unsurpassed.

Looking around the audience, I could see children as young as 4 or 5 and all smiles.

I received admission to the show and an interview opportunity to facilitate this post. All thoughts and opinions shared are my own.

Q&A with a Blue Man and Directors

After the show, we had the incredible opportunity to chat with Tom Galassi, Captain and Assistant Director of Performer Development, Jeff Quay, Associate Music Director, and Brett Presson, Stage Manager.

These guys are insanely talented, super easy to talk to, and ooze creative energy.

They feed off of each other in such a way that it explains why the show works and has been so successful.

Q: How often does the show change?

A: They said there are little changes all the time. They don’t do huge changes often because of everything involved, but every night they discover things that could run better, be funnier, or add to the show so they incorporate them as they see fit.

The whole cast and crew have great communication and discuss how the show could be improved every night.

They discuss everything from the music, the movements, the moments of silence… the focus on quality is paramount.

Q: What is unique to the Chicago show?

A: The space, little things, the finale, the people… The biggest thing that sets the Chicago show apart is definitely the space. It’s a fantastic building, location, and the theater is just so… Blue Man.

I don’t want to give any spoilers away to the new show, but there are little things throughout the performance that you’ll only see in Chicago.

Plus, there are no other people on earth like the ones you’ll find in the Windy City.

Because the show is quite interactive, this is a huge component of the overall experience.

There’s a great chance you’ll leave with new friends from the audience.

As for the finale, it’s SO MUCH FUN. I don’t care if you’ve seen every other Blue Man performance all around the world, the Blue Man Group Chicago finale is a must see.

Q: Is it always the same Blue Men? Do you guys ever get a night off?

A: There are six Blue Men in Chicago and they rotate schedules.

Each knows how to play each role–left, middle, and right Blue Man–and they all work together in slightly different ways which also adds to the uniqueness of each show.

Q: How do you keep a straight face?

A: The Blue Man said that he uses impulsive thoughts to keep from smiling.

For example, if he is struck by something funny, he’ll immediately question the scientific cause behind it, making his mind focus more on logic instead of humor.

Q: Do you ever get bored doing the same performance over and over?

A: They treat every night like it’s a “…special night. It’s never boring. New people offer new perspectives which is always new inspiration for us.” If they’re ever just having an “off” day and not feeling it 100%, all it takes is seeing one person in the audience react to remind them that this might be the first time they’re seeing the show, so it’s all for them.

Jeff Quay told us that he was having a hard time getting into it one night and he looked out into the seats and saw this little kid grinning ear to ear having the time of his life. And that was all it took for the night. “That night it was all for that kid.”

The Blue Man said that whenever he needs to get in the mood to perform he does a lap outside before the show (not in costume) and looks at everyone coming in and thinks to himself, that person has never seen this show, neither has that person, or that little kid… I’m going to make their night…

Q: Does the show have many repeat customers?

A: The Blue Man Group Chicago show has about 50% repeat customers. At the end of the night the cast line up to see the audience out and they said a lot of the customers will say things like, “Oh, you changed it!”

The best part about this whole performance is you always see something different.

I know just from talking with the kids afterwards that we all saw different things.

My son and I kept saying we loved certain parts and it’s like we were at two entirely separate shows.

I don’t know how we each saw totally unique things. We were sitting right next to each other!

Q: How long does it take to cleanup?

A: About 30 minutes. They have an amazing cleanup crew that has the whole process down to a science. They put on 3-4 shows a day so it’s crucial that everything gets reset quickly.

We were sitting there while the cleanup crew was doing their thing and wow.

It was like Dr. Seuss’ Thing One and Thing Two. Only there were several Things.

It was crazy how fast and efficient everyone was doing their jobs. I’d love to have this team sweep through my house like a cleaning tornado!

Have you ever seen the Blue Man Group Chicago show?

I have never seen a Blue Man group perform and I think I would love this event.

I"ve heard good things about this group. Perhaps I'll get to see them someday.

I have always wanted to see this group. They look like so much fun, and the show looks fantastic. They are so different. One day when they come close by I am going to go!