Skip to Content
Disclosure: We earn commissions (at no additional cost to you) if you purchase products from retailers after clicking on a link from our site.
224 shares 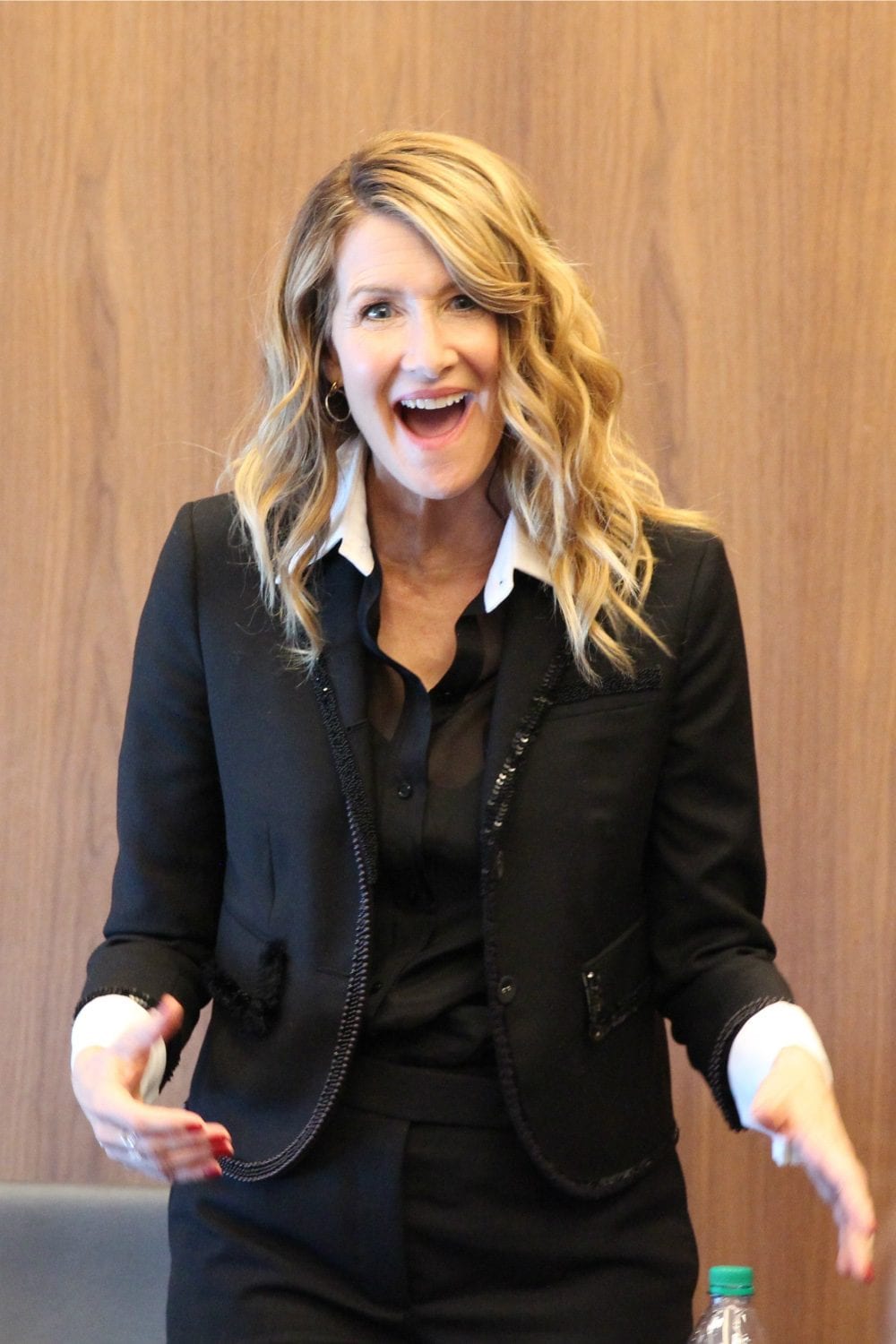 Having already fallen for her as the tenacious feminist in Jurassic Park when I was a kid, seeing Laura Dern in Star Wars: The Last Jedi is going to be amazing. We didn’t get to see the movie, but I have no doubt she rocked her role as Vice Admiral Amilyn Holdo.

Huge thanks to Louise Bishop of MomStart for taking all the photos during our interviews. This experience was part of an all-expenses-paid press junket. All thoughts and opinions shared on this blog are my own. 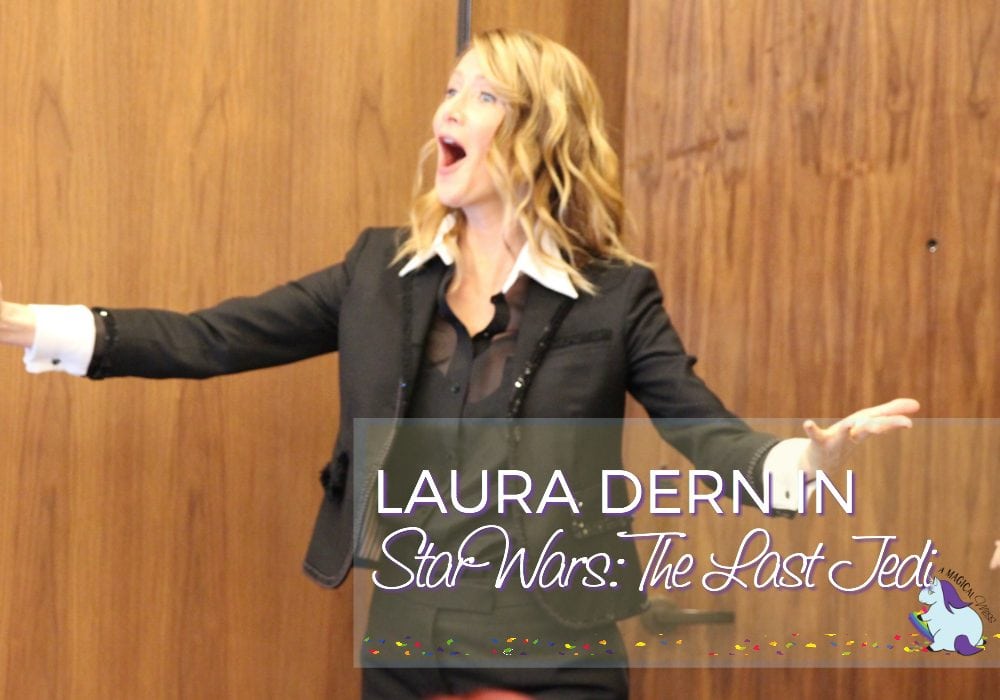 When Laura Dern entered the room, the energy lit up. She gives authentic smiles freely, and her warmth is contagious. Again, not having seen the movie, we had to keep our questions vague, but it was an awesome interview nonetheless.

Without giving anything away, can you tell us about your character and how you developed it?

Laura Dern: “I have purple hair. I can tell you this and great to see you. [She pretended to get up and leave. We all cracked up.]

There’s a new boss in town. I have arrived in the Resistance, and I am a Vice Admiral, and that’s pretty much all I can tell you. I can tell you how amazing it was to be inside Rian’s head–each of these characters, particularly these new characters that he invented. It was incredible to have the privilege of collaborating on what and who she is and how to present a powerful woman. 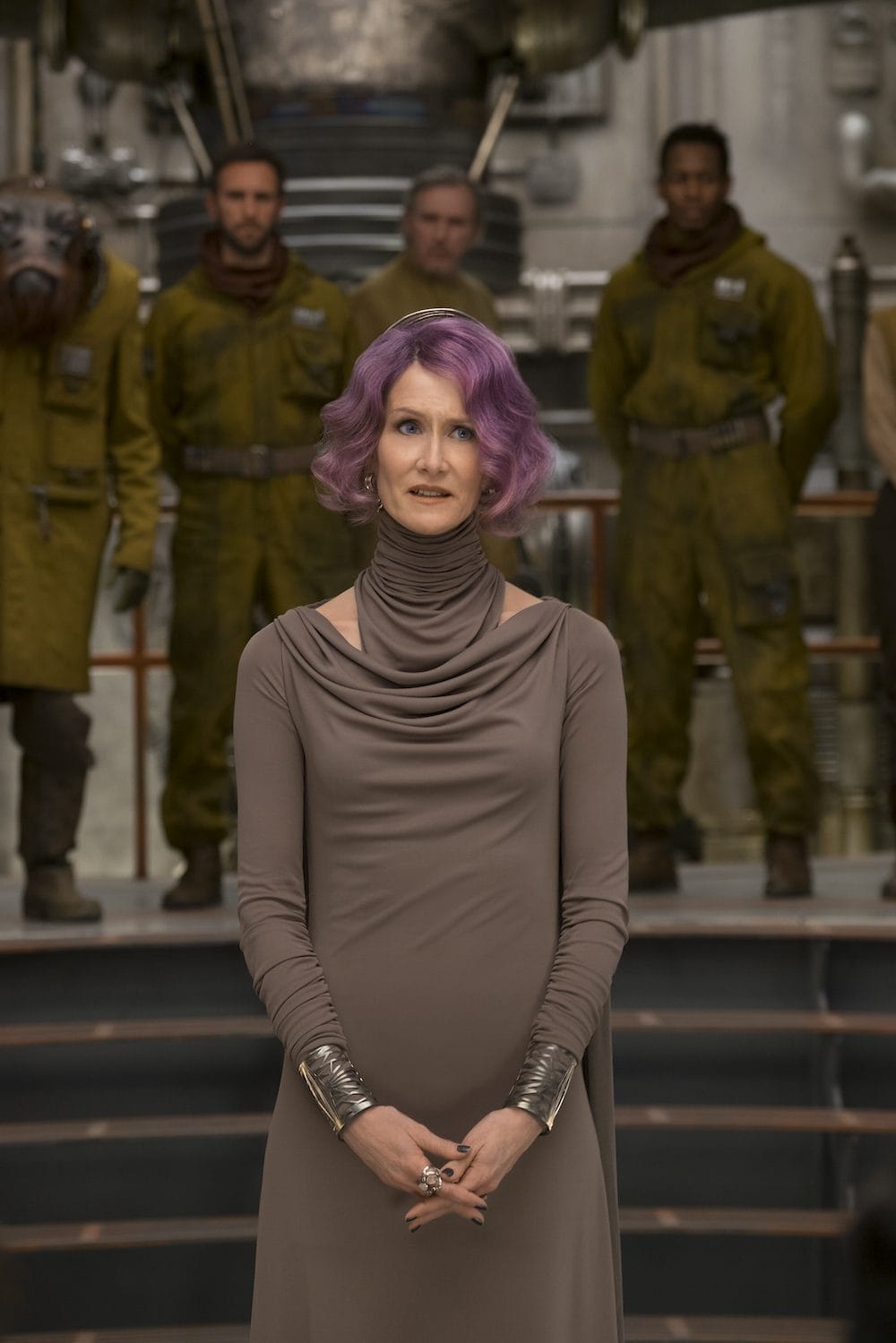 Laura Dern is Vice Admiral Holdo in THE LAST JEDI.

And the longing which I really appreciated of Rian and Kathy Kennedy and all of our Producers to allow a powerful female character to also, her physicality to be feminine, as opposed, to Oh, she’s a strong Female–let’s put her in the guys’ clothes. And I thought that was wonderful and I feel excited to join this amazing legacy of strong females in space, starting with our magnificent icon of Princess Leia. So that was a great pleasure.” 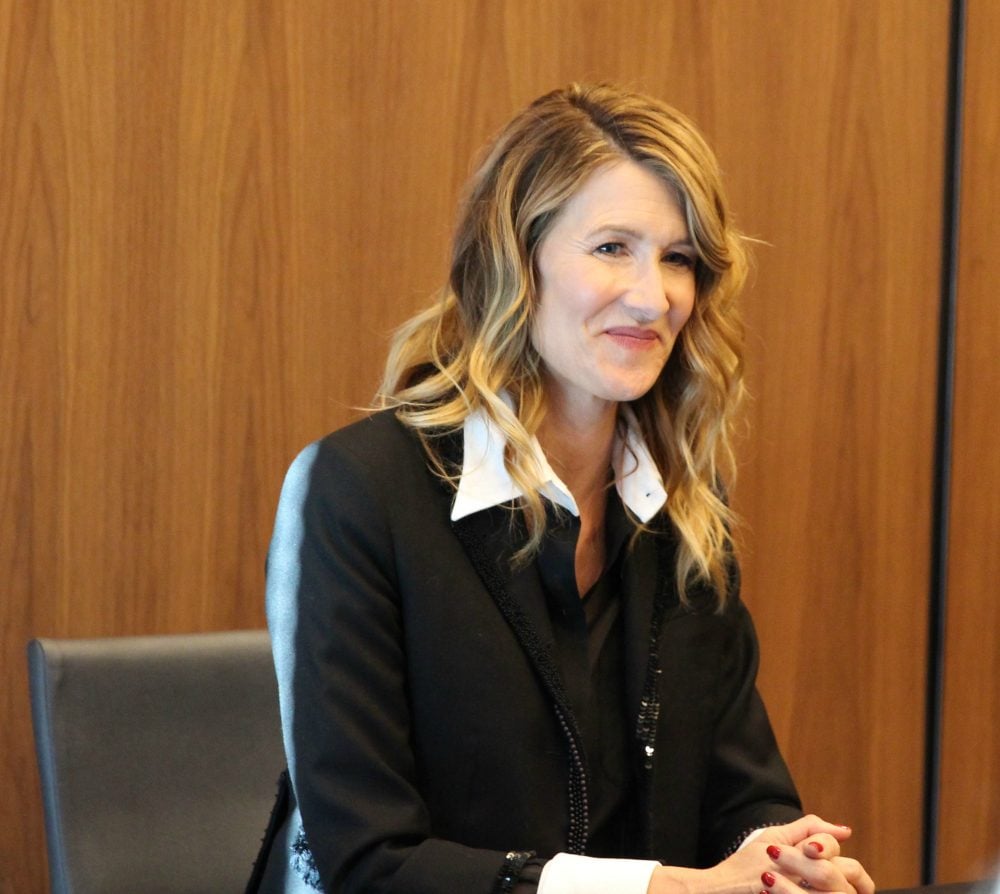 How did you become involved with the project?

Laura Dern: “Rian called asking to have lunch and talk about something. I was told he was an amazing independent filmmaker and he’s really excited about something that he wants to talk to you about. And then Kathy Kennedy simultaneously called me just to check in and say ‘Hey, how are you?’ We went to lunch, and he started describing something he was looking for in a character and would love for me to help invent this with him.

It all sounded great, and it wasn’t until sort of the end of the lunch, he was like [WHISPERS] it’s in Star Wars, and like oh my God, it’s amazing having been a huge fan as a child. I was sort of listening to this amazing story, and that’s what’s incredible about Star Wars. He started describing a world that was about the complexity of being a human being and the battle between light and dark and not knowing which would win, and the struggle of family and the hero’s journey.

You feel it all, and you realize that it is what filmmakers that I’ve worked with in independent film have longed to explore. He described this complicated female character in such a beautiful way. He also spoke to something that rebel filmmakers have asked of their collaborators and in my case, as an actor of me. Then to realize, my God, that’s what George Lucas invented. And that’s why I think this stands the test of time in such a profound way–it’s not a franchise, it’s a legacy of the deepest storytelling we have.

There isn’t a child or an adult that doesn’t connect to that question, and that it isn’t good guy vs. bad guy. All of it is contained and being wrestled within many characters, but within one’s self, and particularly this film which we all got to see a couple of days ago, you feel it in every storyline and every character in a really profound and beautiful way.” 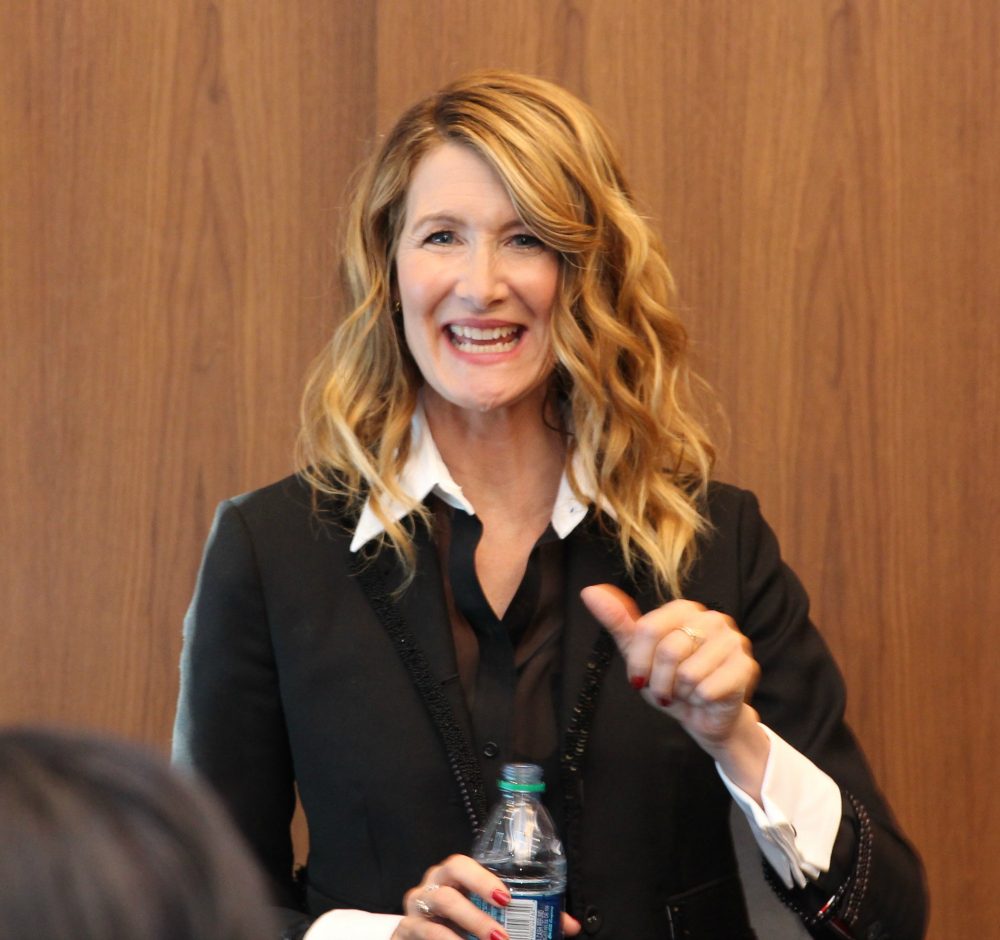 If you had a lightsaber in real life, what color would it be and why?

How did Star Wars affect you as a kid and what is like being in the movie as a fan?

Laura Dern: “I’m spoiled in my answer. I saw the first Star Wars. I was probably 6, or I don’t remember exactly, a little girl and I stood in line. It was the first time I stood in line for a movie at the Cinerama Dome, and it was blocks long. It was profound for me. The genre seemingly would not have been something I was interested in, but the spoiled part is I have been raised by actors.

I’ve been introduced to a world where movie is magical, and my parents are such fans. My mother and my father–they’re rebels, and they love hardcore independent film…

But in this specific case, my dad, I think a few years before, had done a Douglas Trumble film called ‘Silent Running.’ I’m told it was a great influence on George Lucas in that it was my dad alone in space with three droids named Huey, Dewey, and Louie. I became obsessed with these droids. I’m told they were a great influence toward R2D2. And I had a figurine of this droid and remember that idea of being is space with these characters who are your partners. And then suddenly Star Wars opened up this kind of storytelling in this massive way, so it felt personal, as Star Wars does to all of us.”

How is it for your parents being fans and you appearing in the film?

Laura Dern: “They seem excited. My mother’s very excited about the purple hair. She loves the look, and the costume and my daughter was like I didn’t know you got jewelry in space. I said, ‘Yes, Holdo gets jewelry in space and nail coloring in space.'” 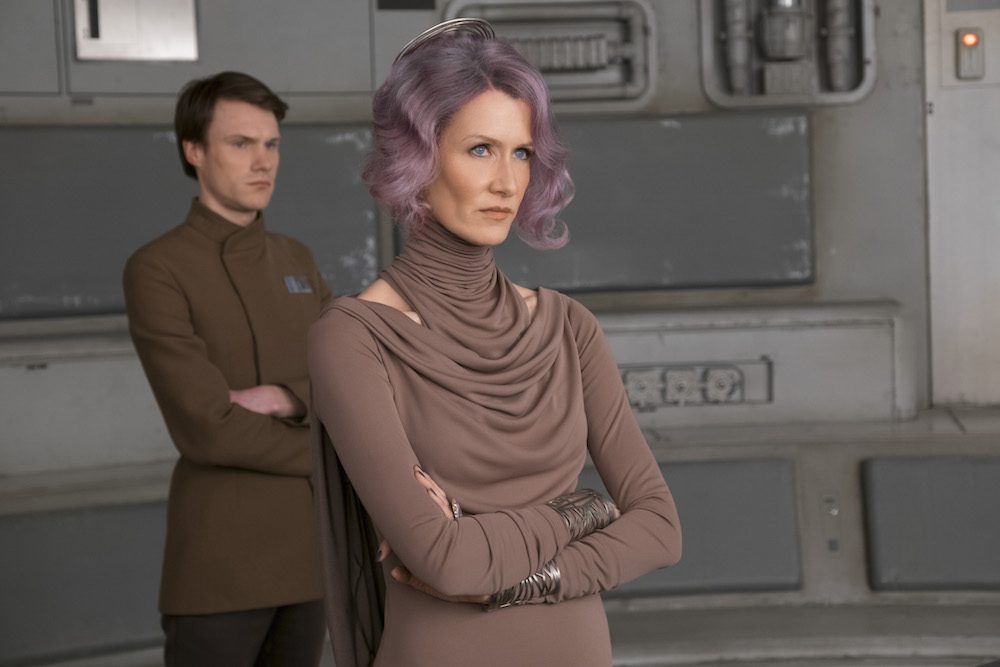 Laura Dern is Amilyn Holdo in THE LAST JEDI.

How did you prepare for this role and being on set?

Laura Dern: “Well, I think speaking to all of the actors, it’s incredible that we have this true shared experience of needing to have the moment–the fan freak out moment–to let it all then disappear, so you’re just telling the story of these characters. Because it’s insane to get there and rehearse with Rian, and everything’s deeply personal, and you know, the part of my life that does come from independent film.

I’ve got my clothes on, having coffee with Oscar Isaac and Benicio del Toro, I’m like, ‘Hey, I’m on another independent movie with my fellow actors–this doesn’t feel like any other movie I’ve done–which is hilarious, with Rian who’s this independent filmmaker–so I’m like, ‘Are you sure this is Star Wars? Cause look we are. What is happening?’

But then, you walk onto set, and in the morning, Rian was like, ‘Oh, somebody’s a fan, and wants to say ‘Hi.’ This was right before we were starting one day. I was standing making tea, and I turned around, and Chewbacca was there and like embraced me, and I cried. I really cried. It was so moving to me. And then, you know, being on set and seeing R2D2 and these characters we all fell in love with–it’s stunning. Then you have to get over it and go to work. But it’s an incredible opportunity and experience. I’m so happy to get to be part of it.”

In theaters December 15th! Do you have your tickets yet?

Check out this new video of the worlds in The Last Jedi:

The Nerf Rival Apollo XV-700 – Star Wars Mandalorian Edition Blaster and Face Mask is an out-of-this-world gift idea. It comes in a beautiful box with artwork throughout the inside and is super high quality. It’s perfect for super-fans or older kids, teens, or adults. My son turned the entire yard into a battleground from a cold planet. He’s sixteen and seeing him play like a little kid was AMAZING. Find it exclusively at GameStop.

Don’t forget to come back for more interviews and Star Wars: The Last Jedi coverage! Interviews are rolling out all week.