Skip to Content
Disclosure: We earn commissions (at no additional cost to you) if you purchase products from retailers after clicking on a link from our site.
75 shares 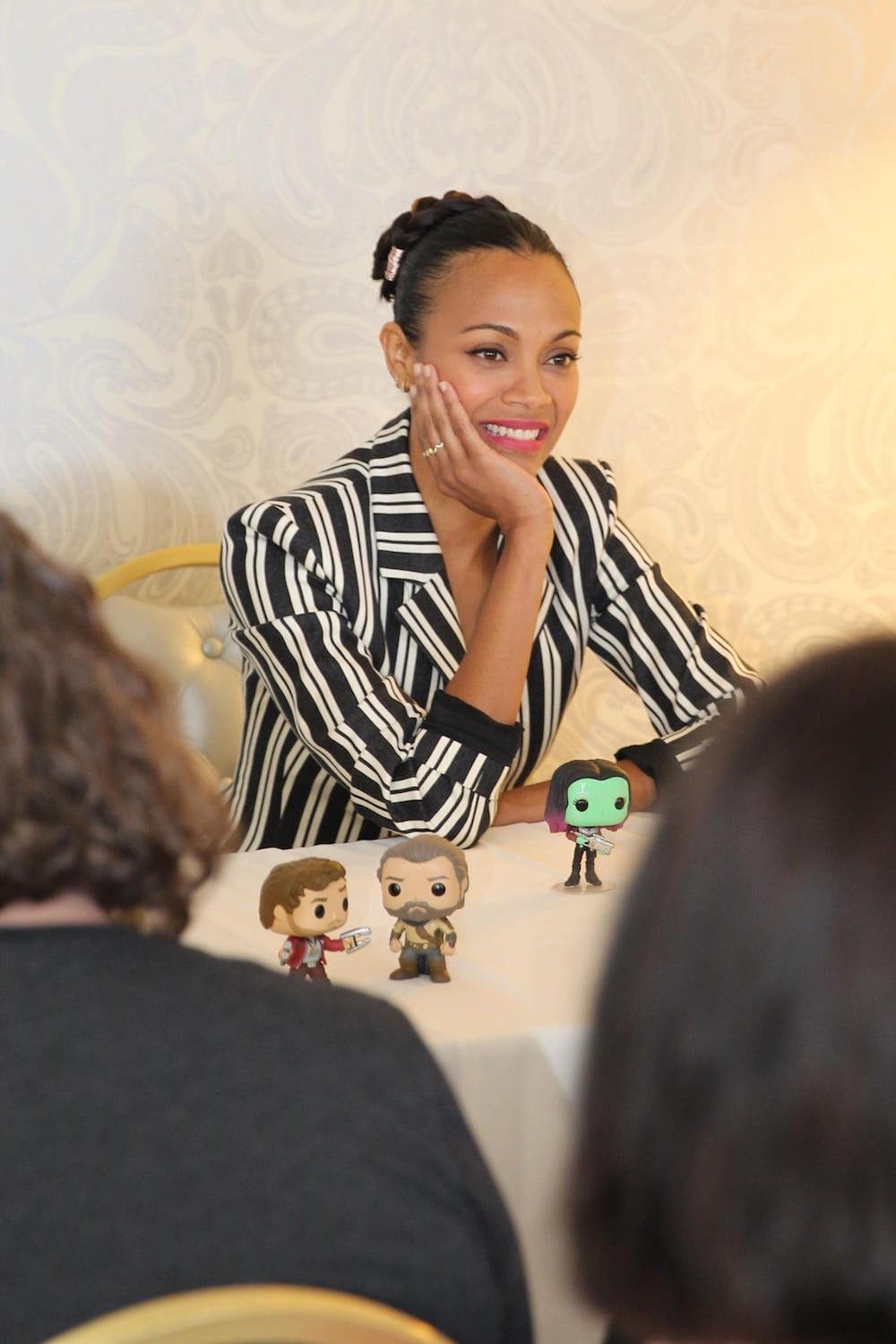 When we first met Zoe Saldana on the set of Guardians of the Galaxy Vol. 2 last year, my initial response to her presence was that she is a role model for all women. I don’t care how old you are, this woman is a force. She’s healthy, passionate, focused, and owning her struggles with dignity and grace. All of us left feeling inspired by her energy.

The vibe when we met her again–this time in LA on the Guardians of the Galaxy Vol. 2 press junket–was no different.

Upon entering the room, Zoe Saldana was all smiles. We did talk about a lot of spoilers since we watched the movie the previous night. However, I am keeping this post spoiler free.

We asked Zoe about her role in Vol. 2 and how she felt about it.

Zoe: “I loved it. I loved it. I was very excited, there were three female characters in this movie, and they all were going to provide three different essences. Mantis is such an innocent creature, Nebula’s so angry, and Gamora is so maternal. She’s turned over this new leaf. In the first movie, she was so selfish. It was about getting away, and running away from her father. Now, it’s about keeping this family together and always on track.”

Did you pull from your own maternal traits?

Zoe: “No, I never looked at any of them and thought, Oh, these are like my kids. [LOL] No. I’m the middle child of three sisters, so I was never the Gamora. My sister Marielle is more the Gamora. She keeps us on track and everything… so, channeling something in Gamora, I think I was just thinking about my sister–the responsibility she must’ve put upon herself to help my mom raise Cicely and I.”

You’re open about your passion for women empowerment, can you talk about how much you love bringing Gamora’s strength to the screen?

Zoe: “I love it. I do, I do. But, I would like to take a break from playing kick ass science fiction females. I’ve been doing it for over ten years. I’m kind of tired. But, growing up, when I was little, I only had two icons that I can reference and I would watch their movies until my tape would break. It was Ellen Ripley from Aliens, and Sarah Conner from Terminator. I would watch these movies endlessly. And then it was Jamie Lee Curtis, when Katherine Bigelow did Blue Steel, and James Cameron also did True Lies… But other than that, I was always watching action movies told through the eyes of males, always feeling that gap, that void. I feel like I did take it upon myself to just be happy with the fact that I took a gamble on these movies for a first time, they ended up being super special, and they went into sequels. I didn’t think of this, trust me. It was not my idea. I had my responsibility to fulfill them. But once I was there, I didn’t want to be bitter about it. I wanted to acknowledge that maybe, maybe it means something. Maybe it is important that I’m part of those women that are filling in that gap, so that women can have, I don’t know, more options, more references to look into.”

What do you want young girls to take away from Gamora, or your character in general?

Zoe: “Her name is Leanne. She’s phenomenal. She really did all the parts where Gamora looks absolutely, unbelievably, cool. That’s Leanne. [LOL] And all the parts where I’m posing, and taking out my sword and stuff, that’s me. [LOL] But I also did do a lot of those jumps. I would do a lot of the stunts that she would do, but like, the PG-13 version. Because one, I can’t do them. And two, it’s a liability to the film if I get killed or something… there is this jump I did, they made me jump from three stories. I was on wires, but I still can’t remember if somebody told me, and I just brain farted, or somebody forgot to tell me that I was going to free fall. I was not going to feel the tension on the wires. So when they said ‘Action!’ and I jumped–’cause obviously, I don’t like to take my time, ’cause there’s so many men watching you, I jumped. I jumped and thought I was dying. Forgot to speak English… I was like help me!

And then, James Gunn was like, ‘Yeah, your face was kind of awful there. You have to do it again.’ And I was just like, oh my God. So, I did it again. And then, you guys can watch it, it’s on Instagram, but as soon as I land, I was like, ‘I don’t want to do this again.’ The girly girl came out of me. It was awful, but super fun.”

What do you do during the 4 hour makeup process?

Zoe: “You guys. I talk to everyone. I talk in every language. I turn on music. I’m on my phone. I FaceTime with my kids, I FaceTime whoever’s up. Like, oh, New York is up, or DR is up, what’s up, la, la, la… [LOL] I’m talking to myself. Sometimes I would see them, putting the TV on, like super high, to see if I would just get the pictures and shut up. ‘Cause I’d be there from 2:30 in the morning until the time I get to set, I talk to everybody. But I’m just one of those mom-a-la’s. I’m just an old lady. I just talk.”

Zoe: “I don’t have to give Karen any tips on performances. Karen’s a badass. This girl is like the Hulk, in acting. She’s like Bruce–Mark Ruffalo–like oh, hi, hi, hi, hi. And then, when she turns into the Hulk, she transforms into this character, you forget that Karen was in the building. ‘Cause she just turns into Nebula, and she’s menacing and everything. But in terms of stunts, yeah… I’m like, ‘Baby girl, you gotta stand, you can’t walk like that.’ [LOL]

I don’t think she’s ever been to a gym, still to this day. And, I was just like, ‘With your permission, I love you, and I’m just, you know, I’m here to help.’ And she was like, ‘Please, help me.’ I’m like, ‘Then don’t run like that. [LOL] Keep up, keep up. Heel, toe. Heel, toe.’ And then we laugh it out all the time. But I also told her, and James reiterated, that whenever she did not feel comfortable, she has nothing to prove to anybody, so she can always sit it out. And she did… And she would always pick her battles. But she did a lot more stunts in this movie than I thought she would. We were very impressed.”

Zoe Saldana: Chatterbox, Lady Boss, and all around Lady

As always, spending 20 minutes with this phenomenal woman left an impact on us all. You could tell Zoe was a little tired–between jet lag and the premiere party the night before–it’s amazing, even in her “worn out” state, the energy radiating from this beautiful creature knows no bounds. I’m enormously thankful for her time and the effort she puts into being a role model for all girls and women. High five. Chest bump. And girly, hugs and kisses. Zoe, you get it all girl.

See Gamora in Guardians of the Galaxy Vol. 2 in theaters this weekend! (May 5th)