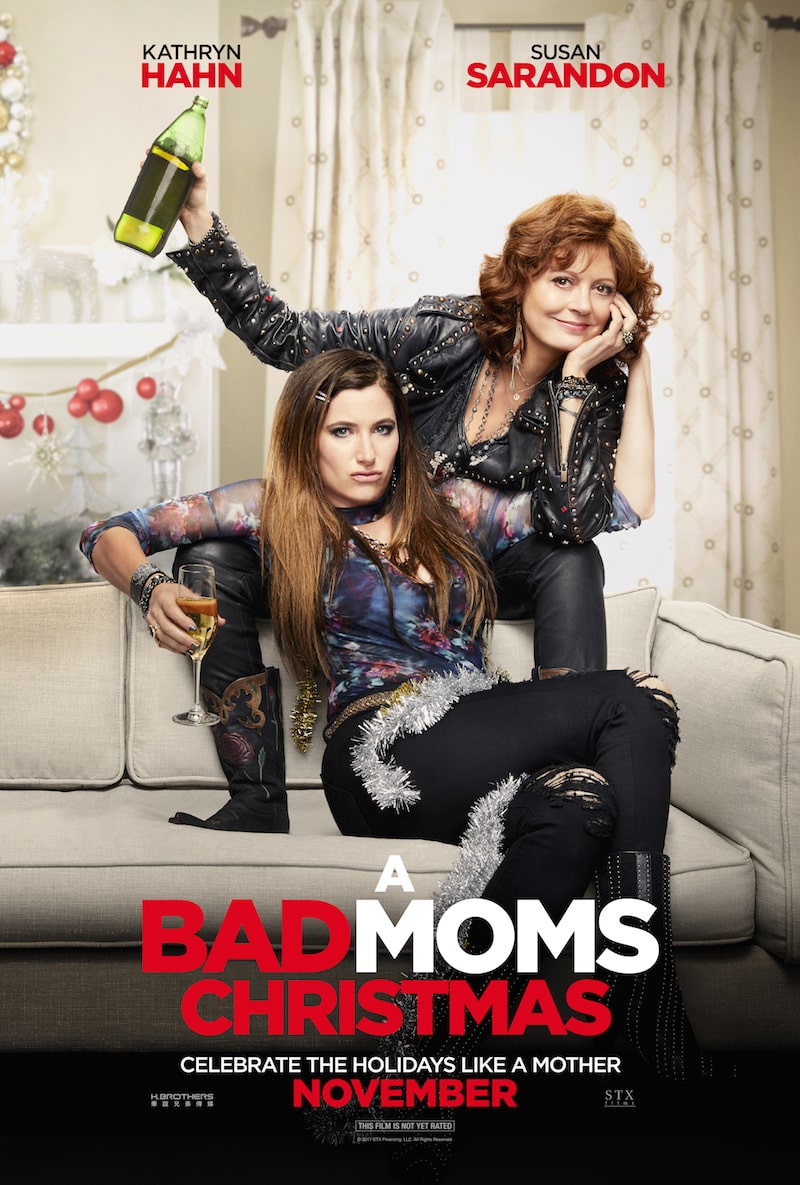 These interviews with A Bad Moms Christmas cast will go down in the books as some of the most legendary. When I heard I’d be speaking with Susan Sarandon, Mila Kunis, Kristen Bell, Kathryn Hahn, and Cheryl Hines, I lost all my words. How unprofessional.

Thankfully, I had some time to collect myself. We also screened the movie, so I was able to formulate a few coherent questions. I attended the press junket for A Bad Moms Christmas, and travel and accommodations were provided by STX Entertainment. All opinions are my own. 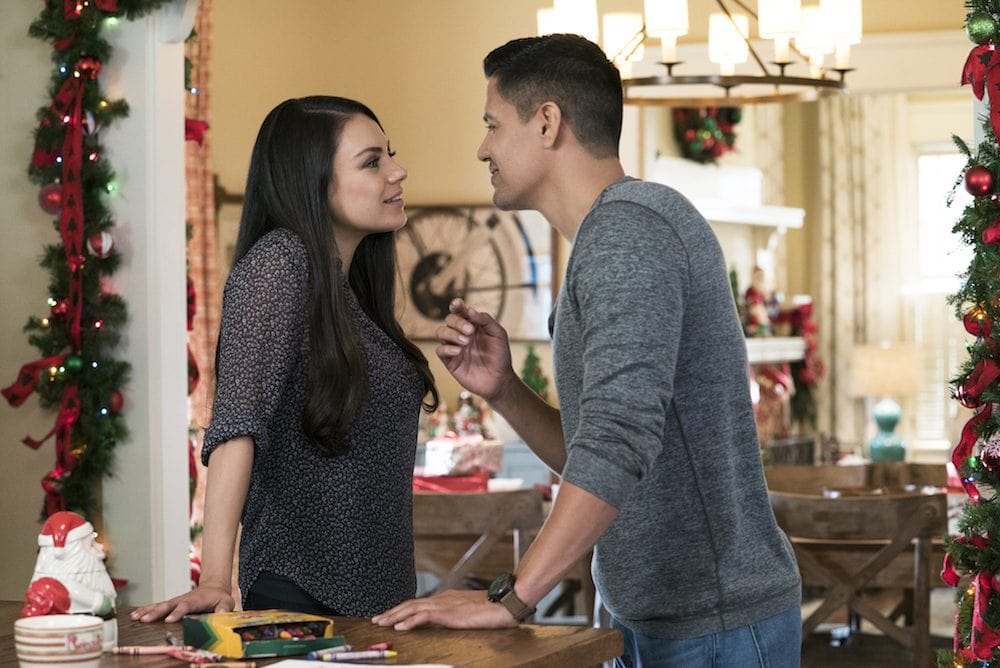 I spent the first day at the junket working from my room. When the doorbell rang, and a bottle of Vanilla Jim Beam whiskey was handed to me with Mila Kunis’ recipe card attached, the temptation was real.

Drank ALL the fancy coffee & spent far too long contemplating a shot of Vanilla @JimBeam. ? SO READY to screen #BadMomsXmas tonight! AD pic.twitter.com/F14jpHD5Zq

So, after the screening, in true Bad Moms fashion, two blogger buddies of mine, Jennifer, and Stefanie decided to have a girl’s night at the hotel bar.

Read my reaction to A Bad Moms Christmas here!

We had our first round of interviews with Mila, Kristen, and Kathryn. These women are intensely beautiful inside and out. It was incredible being in the room with them and feeling like it was just a group of girlfriends sitting around chatting. It was not a typical, rigidly structured interview.

We talked about how these Bad Moms films have started a movement for moms everywhere to reclaim a piece of their independence and let loose. Kristen Bell talked about how important self-care is and not being ashamed to make/take “me” time.

“Do you know how many times I’m here? Once on Earth, one time. So, I want it to be joyful, and happy, and exciting. A good portion of that joy, and happiness, and excitement is my kids, and then every now and again you hit capacity, and you’ve got to switch it up, and you’ve got to take a girl’s night.” –Kristen Bell

Mila admitted to feeling bad when she goes out with her friends, but that she does it anyway because she always feels so much better afterward. She also said she has a very supportive husband who will force her out the door. <swoon>

In response to that pang of guilt all us moms seem to get when we take time to ourselves, Kristen said, “It’s okay to feel two things at once. That’s something that’s not said enough.” 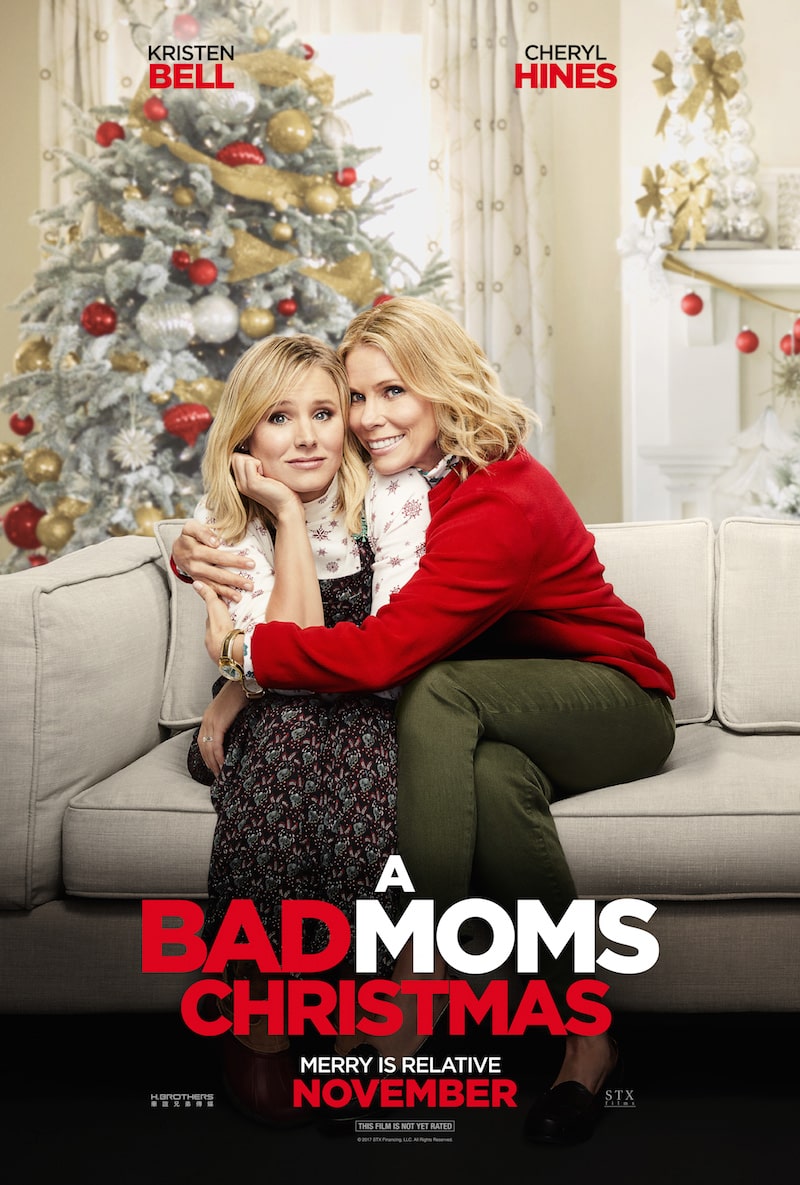 After speaking with the daughters, we spent some time chatting with Cheryl Hines and Susan Sarandon. The first thing we all wanted to know is if they will get their own spinoff movie. They said they were down for it. Imagine: the older trio wake up in Vegas, and the daughters have to rescue them somehow… yes! I’d see that in the theater. 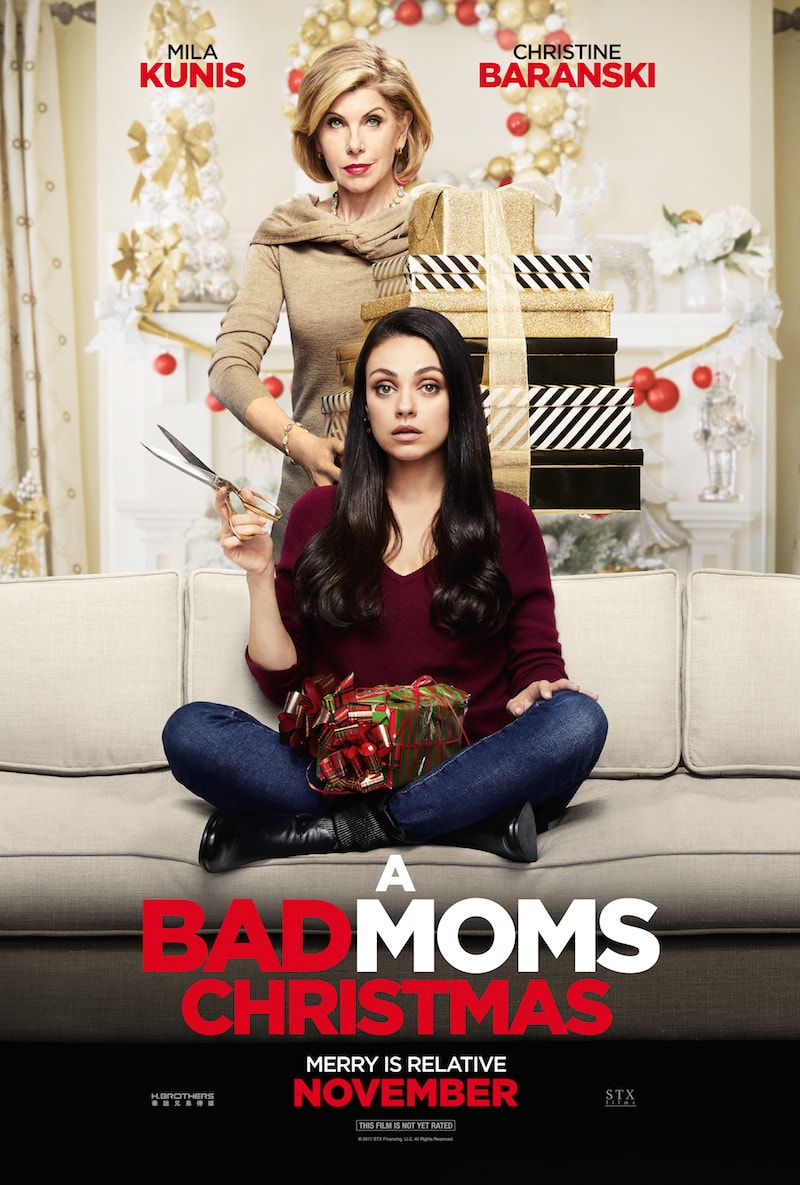 We asked them which mom they most relate to in real life and Cheryl admitted she’s a lot like her character, Sandy. She has a 13-year-old daughter that she confessed to sniffing and hugging more often than what’s probably “normal.”

Surprisingly, Susan also said she’s like Sandy, saying “I’m very hands-on, too, and at a certain point, it takes everything not to just bite them. They’re so luscious,” when referring to babies.

In regards to moms taking time for fun, Susan mentioned the importance of raising sons that appreciate and acknowledge everything we do. We then got on the topic of working on a movie with dominated by females. She said working with a female producer creates a very different atmosphere. “…as women, we’re raised to nurture. We’re raised to anticipate problems. When something goes wrong, I find with women producers, they don’t spend as much time trying to blame someone else as they do solving the problem.” 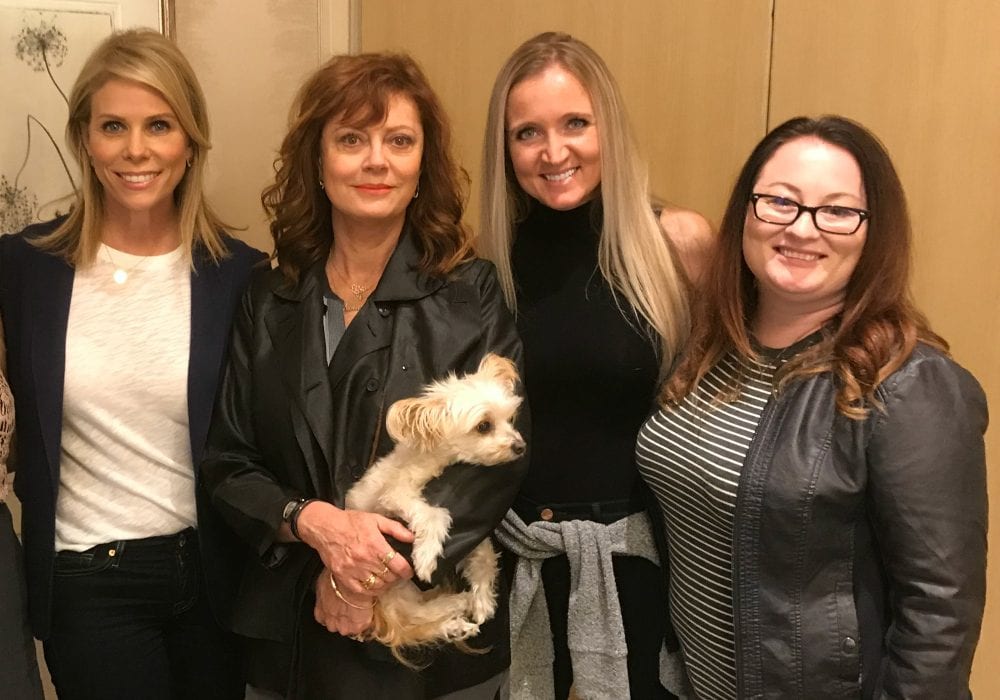 We then got on the topic of rape culture, and while this took us away from the movie, it was a phenomenal conversation to have with such a powerhouse. I’m just going to put Susan Sarandon’s words below. Rewording them would be an injustice:

I think what we have to do is not only call out the men, but raise boys that are more respectful. When I had a daughter I knew how I had to raise her. I knew I had to tell her things were going to be tougher for her. I knew that even though she’s gorgeous it was brains that she would go-–I knew that she had to have her own money. But what I wasn’t prepared for was what happens to boys when they get their hearts ripped out during the socialization process, and they’re told to be completely different than they are. I think a big part of what we have to do is to impress upon our boys… Everyone’s talking about the women that were assaulted. They’re not talking about the men who assaulted. How many men, and we have the statistics on women. We don’t have the statistics on men. The conversation is not focusing on men. You know we’re not talking about how prevalent that is. The women are coming forward, but the conversation is still presenting them as victims. Well, what about the guys that did it? Who are they? How many are they? What allows that to happen? We have to ask those questions.

These little things [infants] come into the world, and they learn what they need to do to be pleasing, what girls need to–what is valuable, what you root for, and that’s up to us. I remember I went to Nicaragua during the revolution, so that was like ’83. And I talked to the first woman who liberated–the first city liberated was liberated by a woman who was studying to be a doctor, and I was like oh my God, it’s so great. She said ‘No, just all the men were dead.’ That’s why the women finally came out from the kitchen. They didn’t let us out from the kitchen. We waited until there had been a vacuum formed. She said machismo is really like hemophilia. It’s passed from the mothers to the sons.

And that really took me aback, and I thought, that’s really interesting because we have to take responsibility in a way for making it harder on the girls than the boys or not holding them responsible. I think there are certain things in our culture–sexual harassment is one. Endometriosis is another where this is just something that happens. Your period was really painful–that’s part of being a woman. Don’t try to get out of it. Bullying is another one–Oh, that’s part of growing up. Now there are conversations, and people are saying this is out of control, and we have to deal with bullying. We have to deal with these values. We have to say ‘No, suffering isn’t part of being a woman.’ We have to say, ‘Domestic abuse isn’t part of a working relationship.’ And that’s up to us. We have to take responsibility. 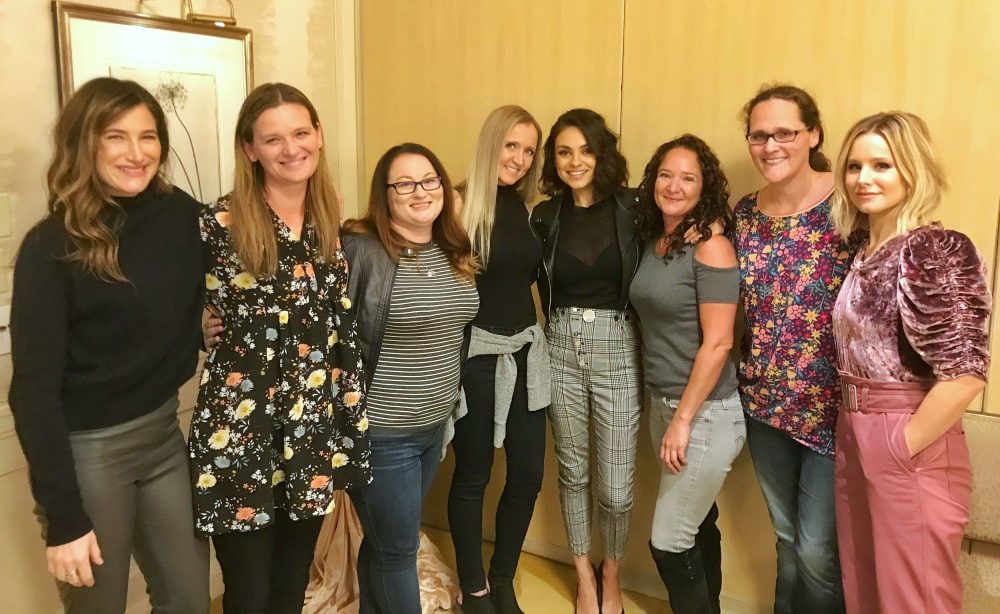 I left that room feeling like I was ready to take on all the world’s problems. Susan has such a powerful presence, and her voice commands the room. Her words are more important now than ever, and I hope we’re all listening. It starts with us–MOMS.

I have not seen the movies yet but really want to. Looks so fun

valmg @ Mom Knows It All

The fact that questions were less structured sounds very appealing to me, I'd appreciate a more personal discussion. This sounds like it would be great for a girls night out.

I loved this movie so much! Laughed so hard. It's neat that you got to interview the cast.

The perfect movie to see with the gal friends, an evening if drinks and laughter is what we all need sometimes.

We finally recorded the first one and will be watching it next weekend! Then we can go see this one in the theater!