Skip to Content
Disclosure: We earn commissions (at no additional cost to you) if you purchase products from retailers after clicking on a link from our site.
50 shares

Most people think being a vet tech is all belly rubs and ear scratches, and it is – occasionally. There’s also quite a bit of dodging teeth and claws, wrangling crazy cats, and trying to keep bodily excretions out of your mouth. The best way to describe being a vet tech is with this picture. 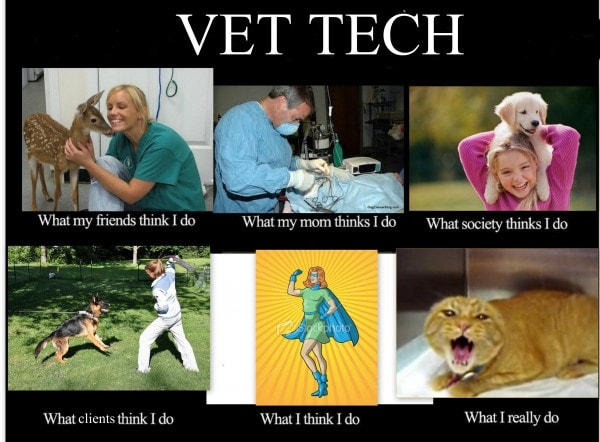 Read Next: Reasons to always get the kennel cough vaccine.

The Cuteness of Vet Tech Work

In my opinion, nothing’s better than a dopey golden retriever. They are absolutely my favorite breed that comes into the office. The sheer love and affection for anyone in their line of sight can be felt like a physical force. Even when we’re doing the most uncomfortable tech work on them, those guys are generally wagging their tales and trying to lick us.

My coworker, Katie’s, golden is a perfect example of the temperament these guys have. Ladies and gentlemen, may I present to you, Kayla Marie, a shining example of golden goofy-ness. 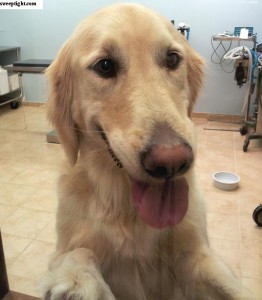 Of course, the cuteness isn’t limited to dogs or cats. I remember a rat that came in with possible “Rat Bite Fever.” She was a great rat. She ended up being fever-free, which was great, because she had been crawling all over me and licking me.

Interacting with these cute little critters is the part of being a vet tech that everyone loves. It’s true we make lots of fuzzy friends, but that’s not the end of the story. Now that you’ve seen the cuteness of vet tech work, continue on for…

The Grossness of Vet Tech Work

I said before that being a vet tech isn’t all belly rubs and ear scratches. I hope you have a strong stomach, because I’m about to give you all the gory details about the nastiness that we deal with every day at work.

I know right now you’re thinking, “Ear cleaning. How bad could it be?” Well, I’ll tell you. Cleaning ears can be a simple as wiping out dirt or as complicated as cleaning out infection, blood, and occasionally, necrotic skin. It can be super nasty.

For example, a golden retriever came into the office a few weeks ago with a severe ear infection. His owner had let him go with this infection for around two weeks, so we had a fairly disgusting job to do when we got him to the treatment area.

Here’s what we found:

What? That’s not so bad, you say? Well, I have not yet begun to gross you out. I’ll now move on to the cat that came in a few days ago. This cat was severely underweight, dehydrated, and battling a MRSA infection on her hind end. I won’t go into all the details. You’d be reading for hours. I’ll just get to the really bad part. MAGGOTS! 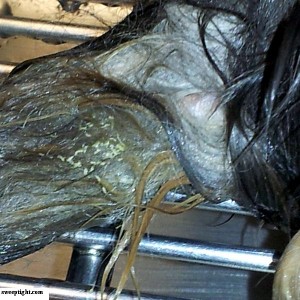 Yep, those are maggots.

Yes, those little white things at the base of the cat’s tail are maggots. They were living in her anus and her vagina. See? I told you it would get worse. The maggots had migrated from the infected tissue around the base of the tail into the rectum and vagina, where they found a nice warm home full of puss. Delicious.

By the way, these maggots are nothing. I wish I had a picture of the husky mix that came in several months ago. We were shaving hair away from a couple of hot spots on the dog’s rump, and suddenly there was a maggot explosion. It was the craziest thing I’ve ever seen. The dog had a hole in his hip about an inch wide and a half-inch deep just filled with maggots.

There’s more nastiness to the job, but I’m going to move on.

The Very Real Danger of Being a Vet Tech

Working with animals sounds like an enjoyable job, and it is most of the time, but there’s a very real element of danger when working with pets. For the most part an animal that comes into the vet is terrified. There’s no way around it. It just freaks them out. Animals have a fight or flight mechanism, so when they can’t run, what’s left? You got it. Fight. 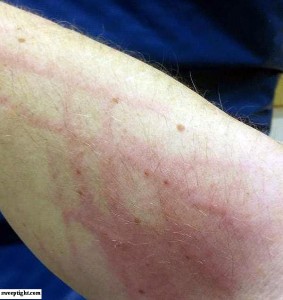 The picture above is a very tame example of what can happen to a vet tech. On this particular day, I was holding a dog for a nail trim. He freaked out and did what I like to call “The Doggie Death Roll.” It’s like a furry version of an alligator’s death roll. Basically, the dog thrashes around uncontrollably, climbs up my body, and scratches the bejesus out of me while trying to get away. Oh, and did I mention that in addition to giving me minor lacerations, the dog peed in my mouth?

In all seriousness, I have scars along the length of the forearm not pictured from a cat raking me with its hind claws. If we hadn’t just clipped its nails, I would’ve been seriously injured. I’ve been bitten in the face and the hand. I narrowly missed having my forearm crushed by a 180 pound Neapolitan Mastiff.

To be a vet tech, you have to really love animals. You also have to accept, and even thrive, on a certain level of danger. I literally put my hands into a lion’s den every day while I try to pry cats out of the carriers they have a death grip on. I put muzzles on dogs that just want to sink their teeth into me. I wrestle animals that could literally kill me. I love it though. There’s no better job in the world.

It’s not all Belly Rubs, but I get Those, Too

On an exceptionally bad day, when I’m cursing myself for ever thinking that being a vet tech was a good idea, I look at all the smiling faces in our waiting room. I think of all the lives that I’ve helped save. I think of all the deaths that I helped make more manageable. And I think of the fuzzy critters, great and small, that I have the privilege to scratch and cuddle every day. So, after all the gory recounting of horror and the brief explanation of the danger of the job, and yes, the goofy picture of miss Kayla Marie, I’ll leave you with this beautiful girl to get the image of dog excretion out of your head. 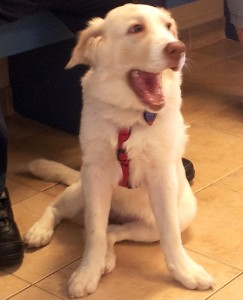 Dogs like miss Penelope Grace here make a horrible day wonderful. She and the hundreds of dogs, cats, rabbits, birds, and even one iguana that come through the office make the job worth while. So yes, being a vet tech is a horribly disgusting, dangerous job, but it’s also one of the most rewarding ones I think anyone could have.

One of my sisters is a vet. She mostly works with dogs and cats and farm animals. The stories..Wowza.

Sharing this post with my daughter... she is considering becoming a vet...

All my childhood I wanted to be a vet and have a farm/ranch. I have always been an animal lover. Getting preggers at a young age didn't facilitate college, so I had to abandon those dreams. Now, as a grandmother, I am realizing part of those dreams. We own a small farm, and I volunteer at our local animal shelter. You are doing a noble job, my dear! No, it isn't glamorous, but you help those who have no voice. God Bless You!

Aw. Thank you so much. Congratulations on your farm!

I could never do that. I am totally NOT good with the gross stuff at all.

I used to want to be a vet when I was younger, I didn't think of all the downsides to it! :-p