Skip to Content
Disclosure: We earn commissions (at no additional cost to you) if you purchase products from retailers after clicking on a link from our site.
2.4K shares 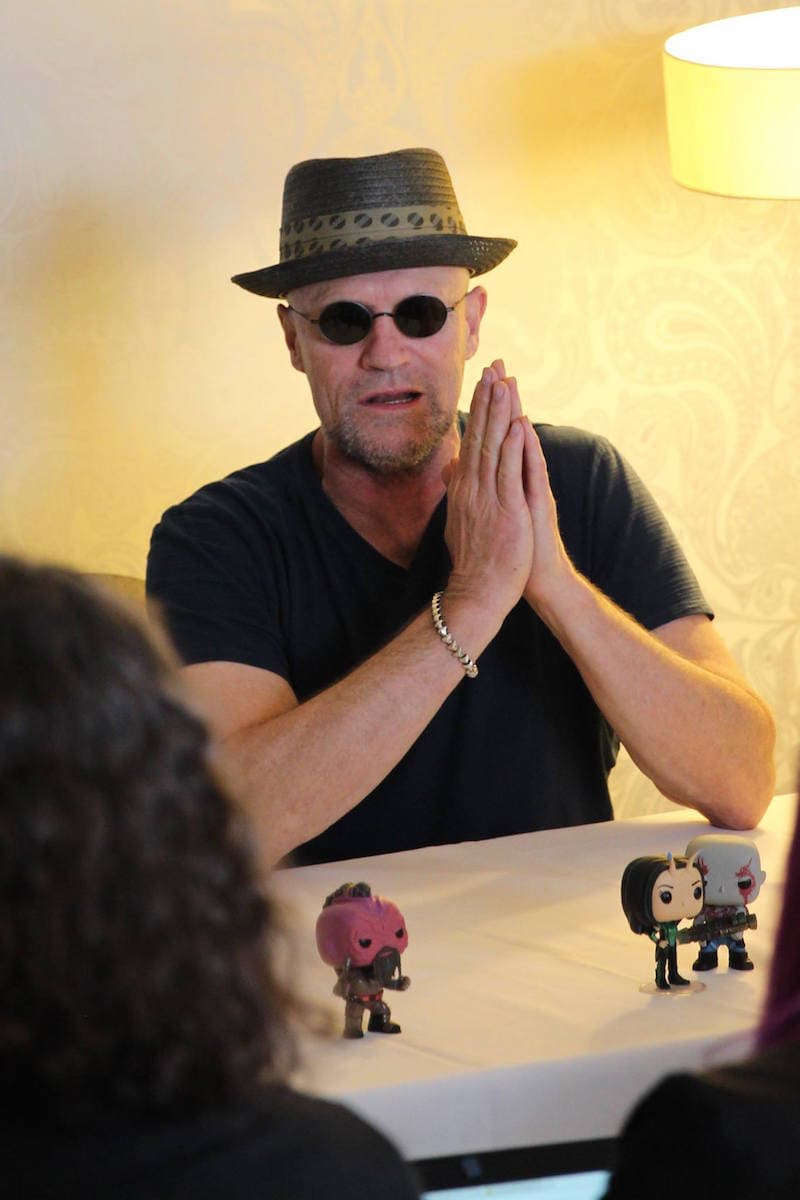 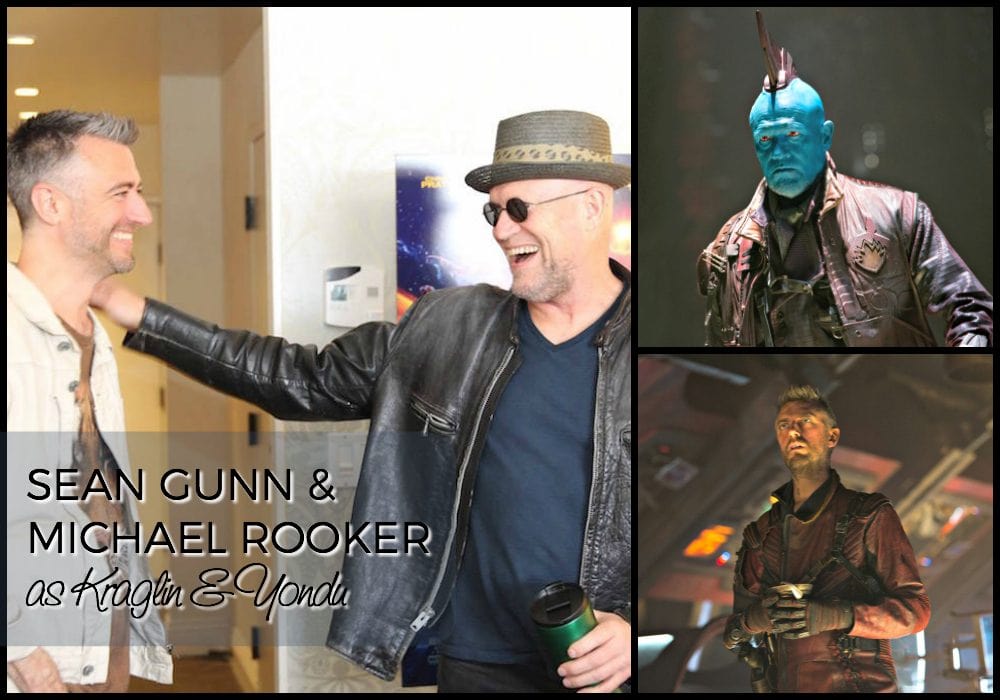 An Interview with Yondu and Kraglin

Once these two entered the room, the laughter began. Michael Rooker immediately complained upon seeing all the POP figures of the Guardians, “What do I have to do to get one of these POP figures made of me?!”

We reassured him that there is one, we just didn’t have his with us. (I’d still like to see one with his big fin.) 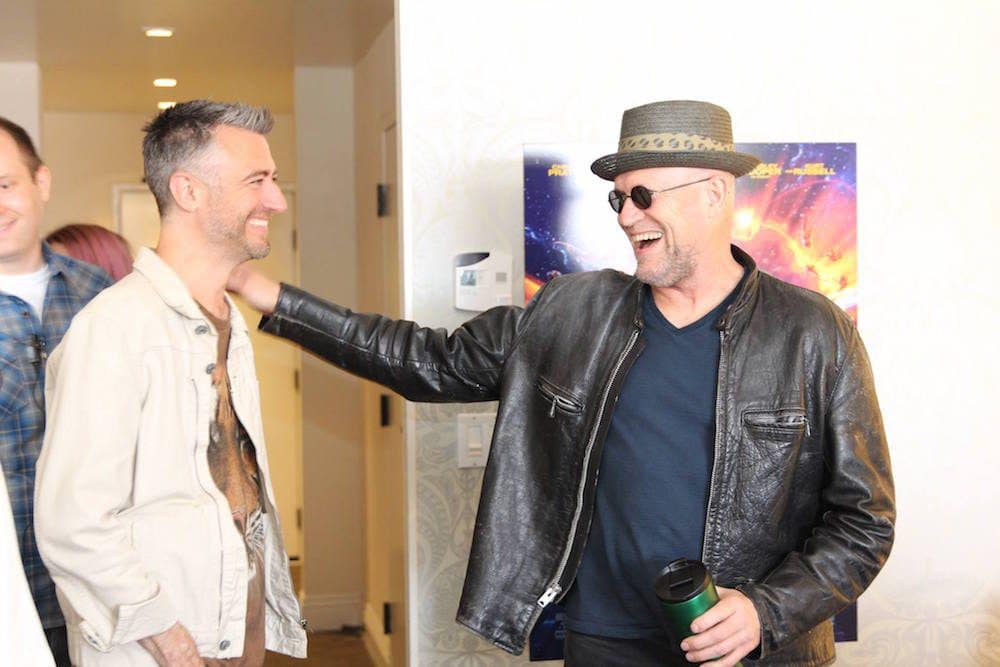 Michael Rooker interjected, “I know everything. I know it all. Five minutes after I know it, it’s gone.” 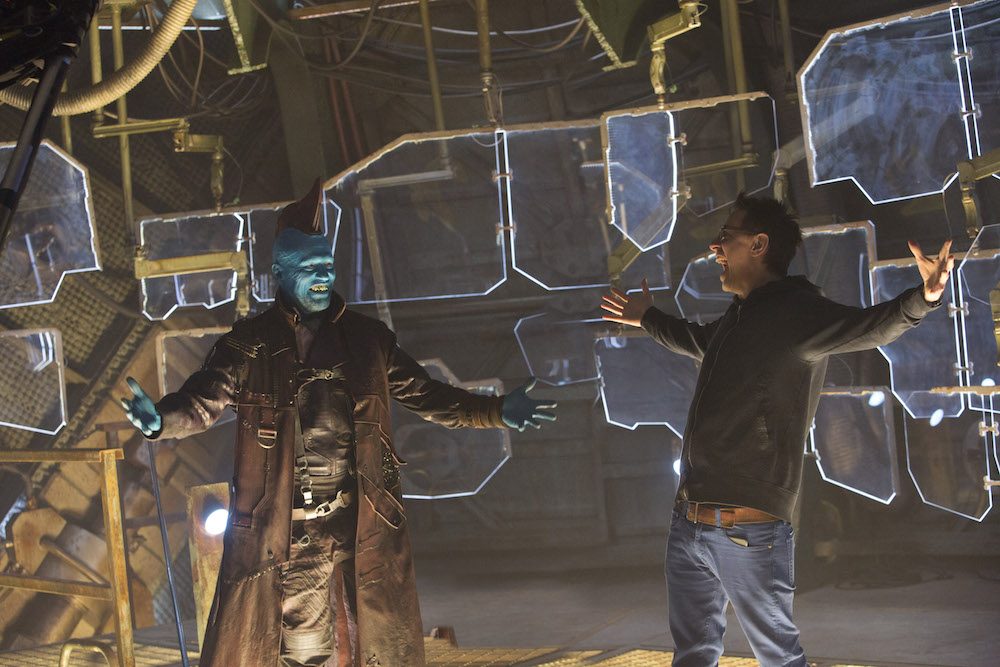 Q: Can you talk about when you learned that you were going to die in the script?

Michael Rooker being the ham that he is just said that he’s used to dying. “It doesn’t hurt at all. It’s okay. I’ll be back somewhere.”

When asked if it was important for him to redeem Yondu’s good side, his response was funny because he’s so different from all the other actors we’ve interviewed. They all give deep answers into how they get into character and Rooker’s approach is far simpler. He treats it as a job and doesn’t seem to emotionally invest much. He said, “Wasn’t important to me at all… No. Just, no, it doesn’t bother me at all.”

However, I have a sneaking suspicion that underneath Michael Rooker’s tough act, he loves these characters most of all. Especially after seeing him on set. It was like seeing a little boy getting to act out and dress up as his favorite superheroes. He was so into every detail of his costume and makeup and having us there to show us everything. It was adorable. 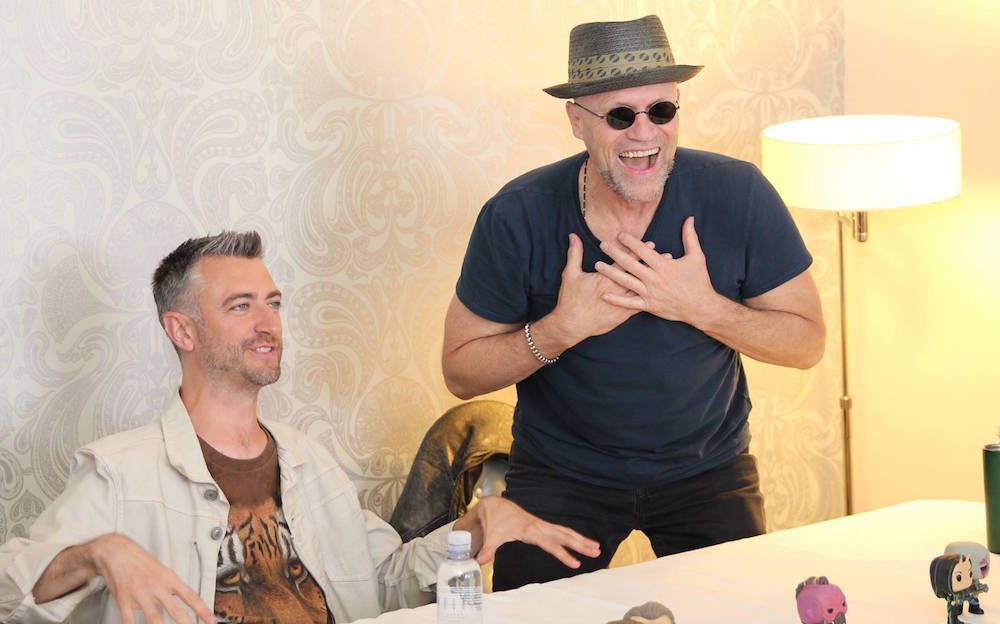 Q: Can you tell us about the makeup process?

Michael answered first, “Yeah, the makeup process is awesome… It took about, maybe a three-hour process to put on and for or five, six layers of different shades of blue and gold and silver and yellow, flax and all kinds of stuff. I’m like, ‘What color is this?’ ‘It’s gold,’ and sometimes they’d just flick it on with a brush…like little speckling all over your face, but tiny little dots that helps to bring out the depth of the paint, so it looks like real skin. And, I mean, it feels like real skin too.” 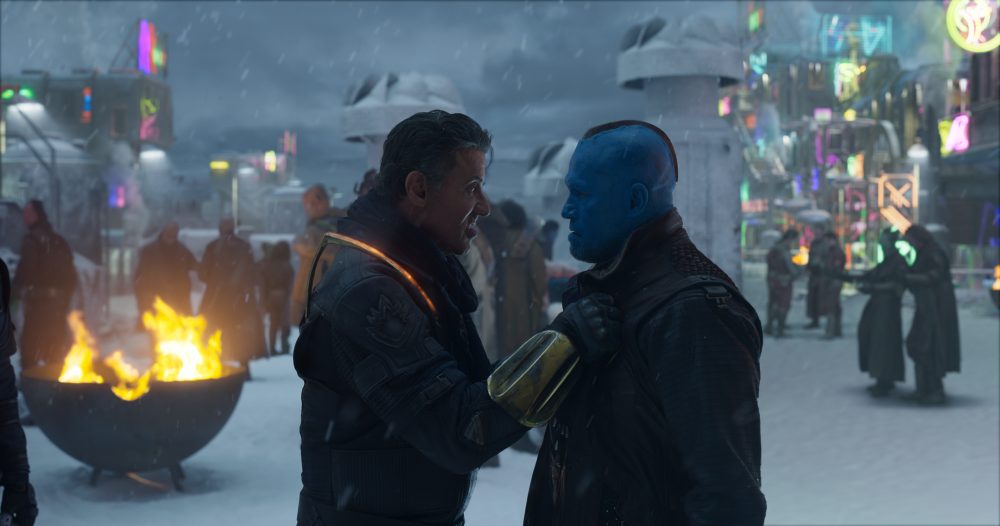 Q: How was it working with the teeth?

Both Yondu and Kraglin wear some interesting “grills” as Michael called them. Sean Gunn requested his teeth be made months in advance so he could practice talking with them in, saying that was the most difficult thing for him.

Michael Rooker explained that the talking wasn’t so much of an issue because his natural speaking method is very “throatal and glottal.” But he struggled with the whistle. “A whistle is all in the front where the stupid teeth are…” But he made it work, and they enhanced his whistle in the movie. 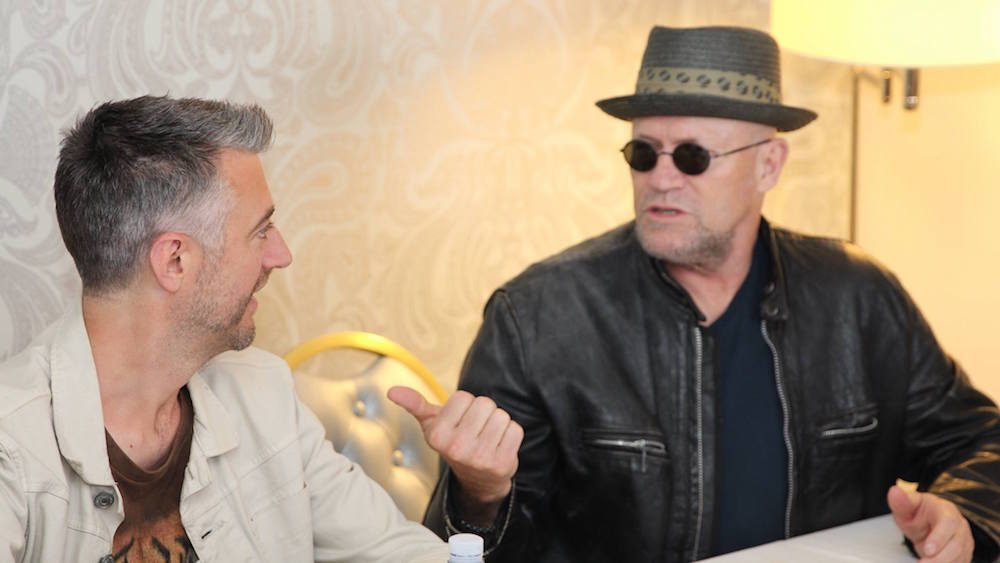 Q: Who is your favorite character, besides your own, and why?

Sean said he likes them all in different ways but loves Drax. “I love the journey that I’ve seen Dave [Bautista] take from his audition for the first movie through this magnificent performance he gives in this movie… I guess if I had to choose, I’d say Dave, but I love all the characters in the movie… Except him. [Points to Rooker and laughs]”

Michael Rooker just said, “I don’t like working with real humans. Never have. I’m going to have to go with Rocket, and Baby Groot are my favorite. That being said, Rocket is my friend right here [points to Sean Gunn], and we worked together day and night doing this. He does all the vocals and all the voice stuff for Rocket.”

Sean Gunn clarified that he is Rocket on set. Bradley Cooper does all the voice-overs and those are put in later. But when the cast needs a reference for where Rocket is in the scene, that’s when Sean fills in, which is a lengthy layering process. “We have to do several takes for anything Rocket is part of. We do a reference take. We’re in there, and we make sure we get one or two good ones of those and then we have to do one with, like a light. When I’m just doing the lines from behind the camera.” 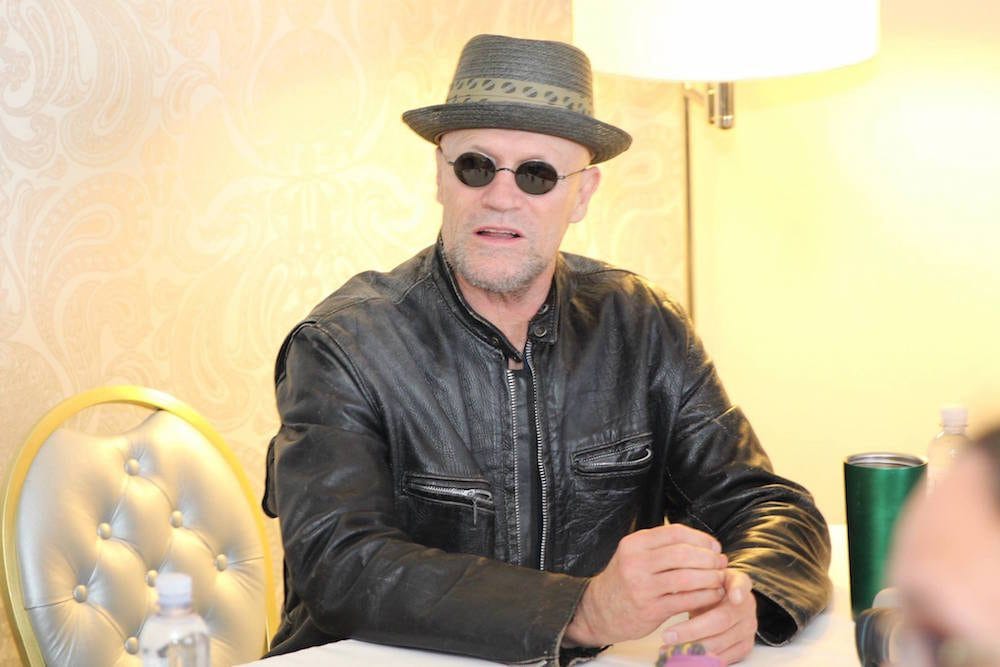 Michael said, “The process for doing this kind of movie with such heavy CGI and also characters that don’t truly exist, it’s like doing five movies for God’s sake. It is. I will forever get a whole hell of a lot more money if I ever have to do this again… that being said, I’ll probably never get hired again. [Everyone laughs.]” 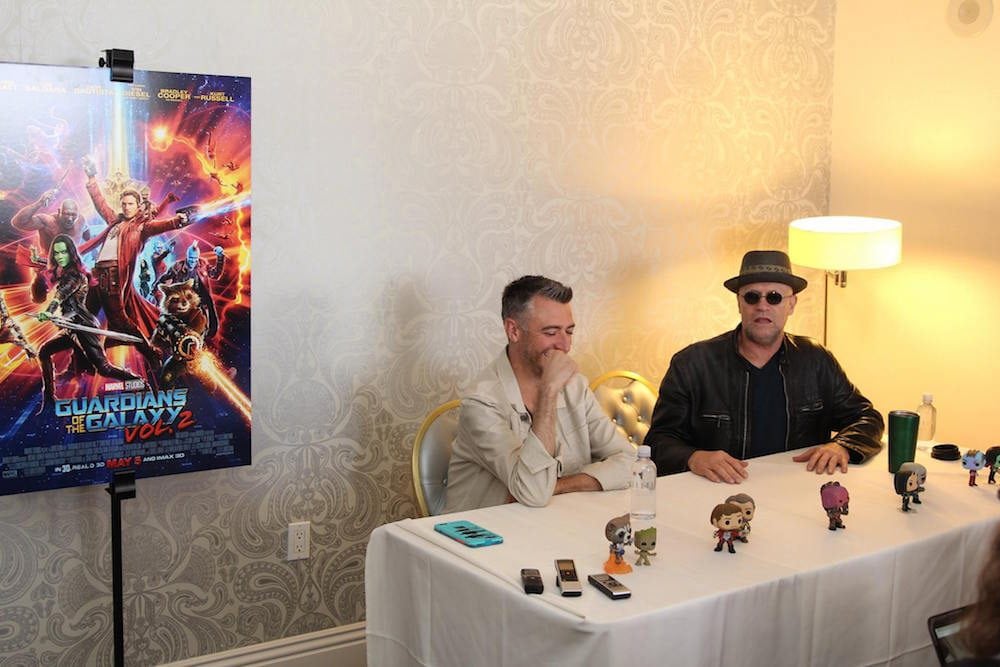 Q: What’s it like to transition from a behind-the-scenes character to an onscreen character?

Sean explained what it’s like working with his brother. “We’ve been working together in various capacities since we were little. I have an easier time working with him that just about anybody because we have such a shorthand for communicating with one another and I know, for the most part, what he’s looking for. So, I think we work together really well. I’m certainly grateful that he gave me such a nice role in this film. I really am happy to be part of it. I know that’s kind of what I’m supposed to say, but it’s true. It’s a great franchise, and I think that the movies are made with a lot of love and a lot of heart. I’m happy to be part of that.”

He also said he was happy he didn’t have to go through the makeup process as extensively as the other cast members. “…I was very glad he let me play a humanoid.” 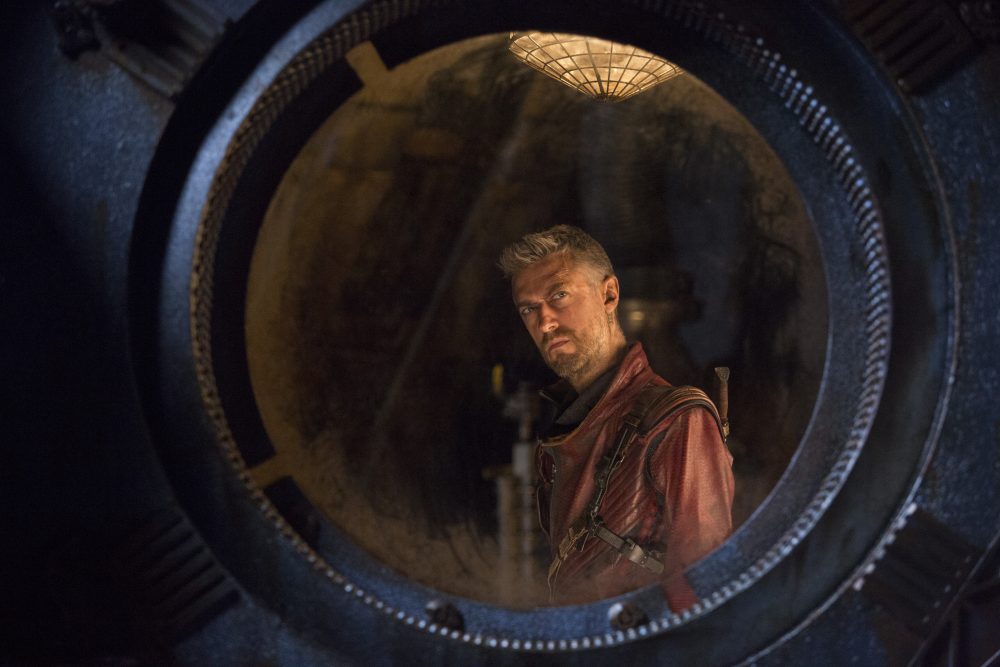 Q: Do you see potential of expanding Yondu’s back story into its own movie and would you like to be a part of that? 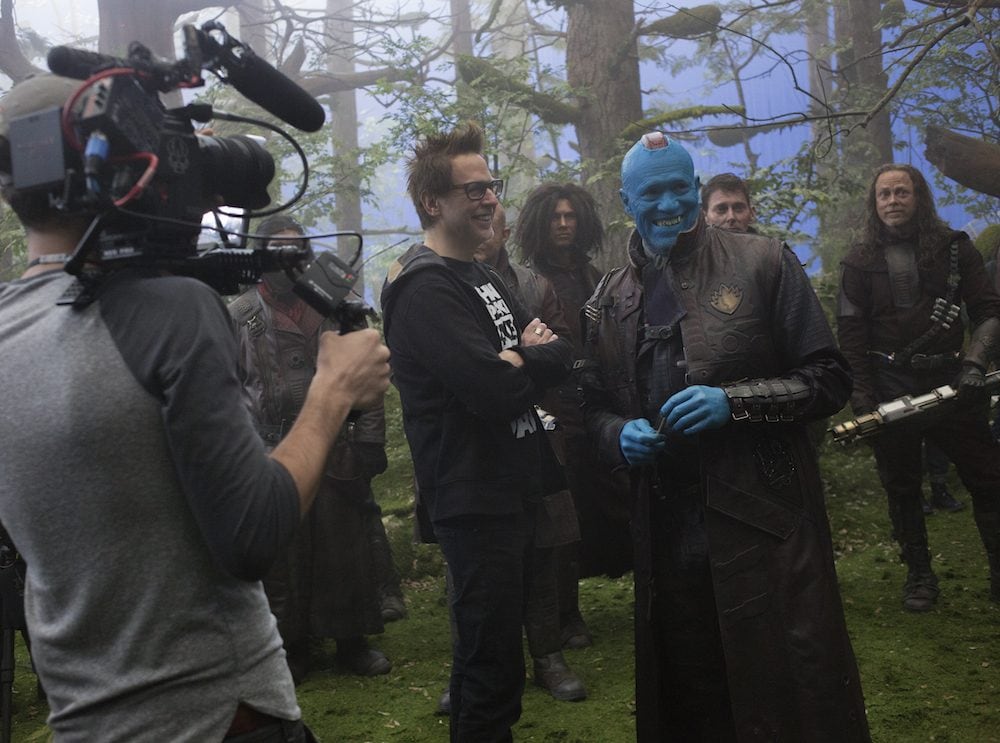 Q: What was it like filming the death scene?

I was expecting a very emotional response because in the film–oh my–I cried a lot. Leave it to Rooker, “You know, it was emotional. Very, very emotional, for everyone but me. I was mostly sleeping.” 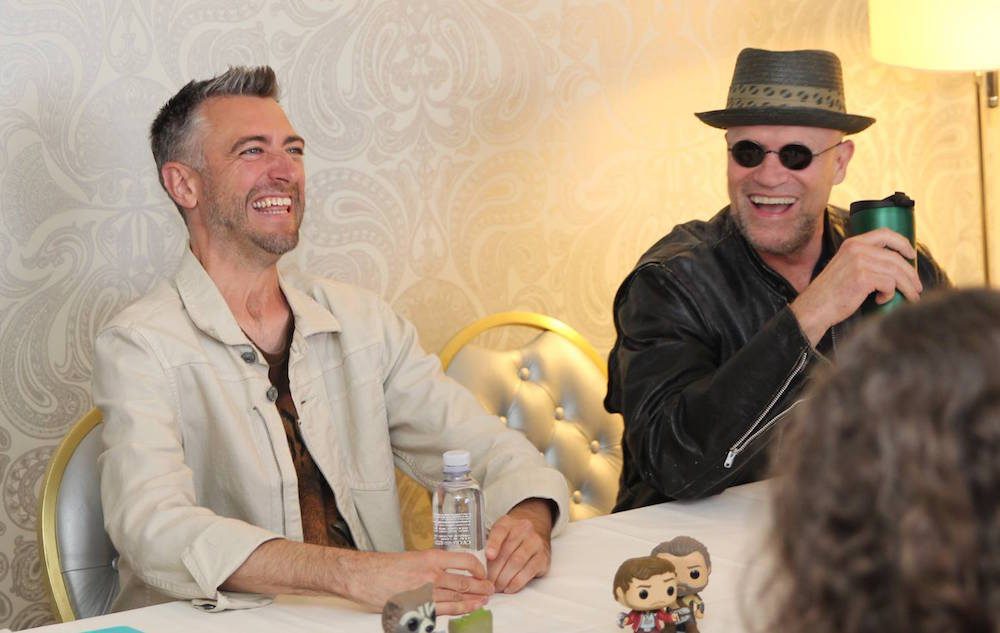 Sean was cracking up and said, “When we were doing the funeral scene at the end, Chris has this big speech, and we’re all there. We’re all super sad and all of sudden you hear [MAKES SNORING NOISES]. Rook was out. So funny.” 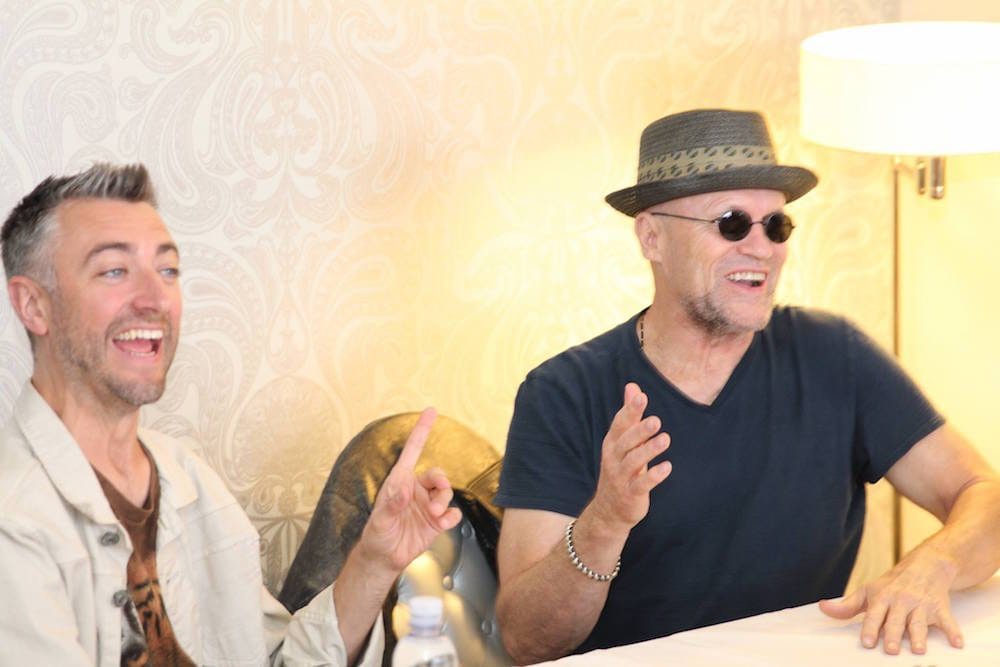 Rooker is quite a character, on an off camera. Sean is a total sweetheart. These two together are a total blast, and I can’t wait to see more of Kraglin and what Michael decides to do next. 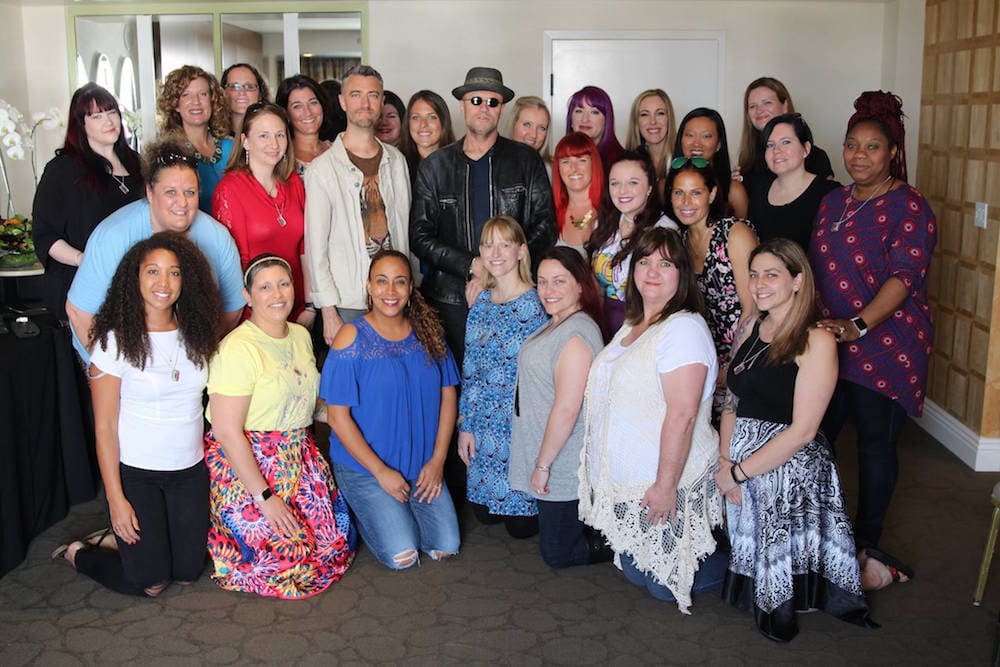 If you know of anyone who hasn’t seen Guardians of the Galaxy Vol. 2 yet, get them the DVD immediately!