Skip to Content
Disclosure: We earn commissions (at no additional cost to you) if you purchase products from retailers after clicking on a link from our site.
310 shares 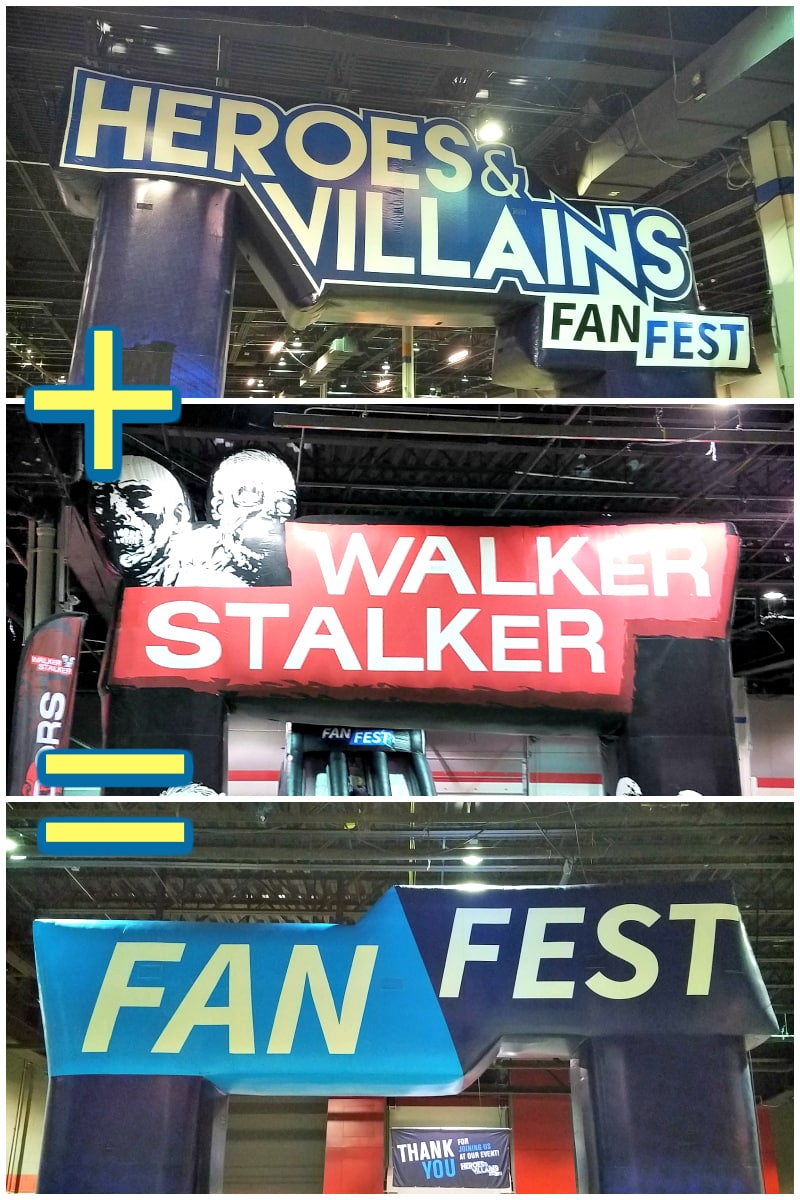 The Walking Dead, Gotham, Arrow, Sons of Anarchy… Are you a fan of any of these shows?

If so, Walker Stalker Con and Heroes & Villains combined to form Fan Fest, and you need to be there.

I attended Walker Stalker Con Chicago last year and had the time of my life. This year was just as awesome.

I received media credentials to facilitate this post. All thoughts and opinions shared here are entirely my own.

Let’s just go ahead and start with Milo Ventimiglia. What. A. Freaking. Dream. You might know him from Gilmore Girls (Jess), or This is Us (Jack), but he was part of this event for his roles in Heroes (Peter Petrelli) and Gotham (the Ogre).

He didn’t have time for an interview because he’s probably the most considerate man on the planet. He spent a good amount of quality time with each and every fan standing in his line and wasn’t going keep his fans waiting any longer for interviews.

Despite his recent surgery on his right wrist, he still insisted on signing his signature and shaking hands (or gently fist-bumping on day two–you could tell he overdid it on day one) with each person.

I spoke with his manager–who is also a total sweetheart–and she said, “Yeah, he really is that great.” We spoke for a few minutes just about how normal human decency seems to be rare these days. A fan ran up to him in his hotel asking for a selfie. He said something like, ‘not before I know your name.’ Introductions were made, hands were shaken, and then he proceeded to have a ten-minute conversation with this person before taking the selfie.

Milo is incredibly present. He looks you in the eyes and exudes genuine energy. He made sure everyone in his very long line felt like an important person, even at great personal sacrifice. He never sat down, and I don’t even know if he took an actual lunch break. For him, the fans come first.

Seriously. When it comes to men, he IS the standard. ♥

My son’s favorite movie from the age of like 4 to 10 was Hellboy. He was also a big fan of Mutant Chronicles. Watching him walk up to meet Ron Perlman was hilarious. His face lit up just like it did when he was little and I was putting in the Hellboy DVD.

You haven’t known happiness until you get a hug from IronE Singleton. This man puts his whole soul into his hugs. It’s magical.

T-Dog is still one of our favorite characters from The Walking Dead. In person, he’s a doll. He and Adam talked about their shoes (both big fans of each other’s kicks), and when my son mentioned that he’s a cheerleader, IronE gave him tons of encouragement and praise.

After interviewing his brother James Gunn on set of Guardians of the Galaxy Vol. 2, I was so excited to meet Sean Gunn! As siblings who work together on this blog, I asked him what it’s like for him to work with his brother. (Sean plays the Ravager, Kraglin.) He spoke highly of James and said it’s great because he knows what he’s thinking and can read him better than anyone else. He also said to check out this “well-written” article on our brotherly dynamics.

Michael Rooker is quickly becoming my favorite celebrity to interview and hang with in real life. He’s a total ham and outwardly loves “mommy bloggers.” He always makes us feel so special and important. It was so fun introducing him to my son. Adam said, “Yeah, mom, you’re right. He’s awesome.”

I first met #PintSizedDaryl at Walker Stalker Con 2016 and instantly fell in love with this kid. His costume this year was priceless. When we bent down to take a photo with him, we could hear “Easy Street” playing from inside his push-bucket.

The Artists of Fan Fest Chicago

Meeting celebrities is fantastic. But in between standing in lines, Fan Fest is loaded with phenomenal art. Here are my top 4 artist picks:

Okay, so I’m becoming a bit of a stalker. This man is my father’s doppelgänger, and I had a full blown breakdown about it in his booth last year. This time around, I was more mentally prepared for the uncanny likeness, but I still had several moments where I found myself just staring. He’s such a good sport for putting up with me.

BUT, this year, I brought my son so someone could finally validate my discovery. Naturally, Adam heard all about Grandpa Dave’s look-a-like and was just sarcastically like, “Yeah. Okay, Mom.”

As soon as he spotted him from across the Expo hall, he was like, “Woah. OKAY, Mom. I get it now.” The resemblance is out of this world. They have the same voice, use their hands the same way, even laugh THE SAME. Cory Smith is nine years younger than my dad.

I suggested we grab a beer with my dad sometime and he agreed. My mind is going to blow if this happens. But, isn’t it horrible luck to meet your doppelgänger? Perhaps, they should never cross paths?! I am spending entirely way too much time thinking about this…

On top of the fact that I’m sure we’re related somehow, Cory Smith is an exceptionally talented artist. His art is all done with a #2 pencil, and the originals go for thousands of dollars. But, you can own a print starting at $25. My best friend, Kit, is now a proud owner of his Deadpool piece.

Can you believe these are done in all ballpoint pen?! I asked Nate how you shade with a ballpoint pen and he cooly said, “With a very light hand.”

He also has a whole line of paintings and prints that are exceptionally done. Check out all his work here!

This is art that will scare children. However, it’s beautiful all the same. Jay is clearly one of the greats and perhaps a bit tortured.

I’m obsessed with that Rainbow Brite piece! Find more of his work by following him on Facebook.

This lovely lady has a unique approach to her incredible work. She makes a huge mess about every six months making paint splatters on a huge roll of canvas. She then cuts each splatter out and whatever vision that splotch inspires–she paints. Check out all of her work on Facebook.

Fun for Everyone at Fan Fest Chicago

Adam and I got to sit in Baby from Supernatural! This stunning replica travels to cons all over the country and raises money for great causes. This weekend they were donating proceeds to a high school girl with cancer and her wish to go to prom in this car. They were also helping cover the costs of her dress and other expenses of the evening.

In addition to all these attractions, enormous jump houses and slides were set up for the young fans.

While meandering around the Con, we bumped into another writer covering the show. Check out Linda’s coverage!

What would you love to see at Walker Stalker Con/Heroes & Villains/Fan Fest?