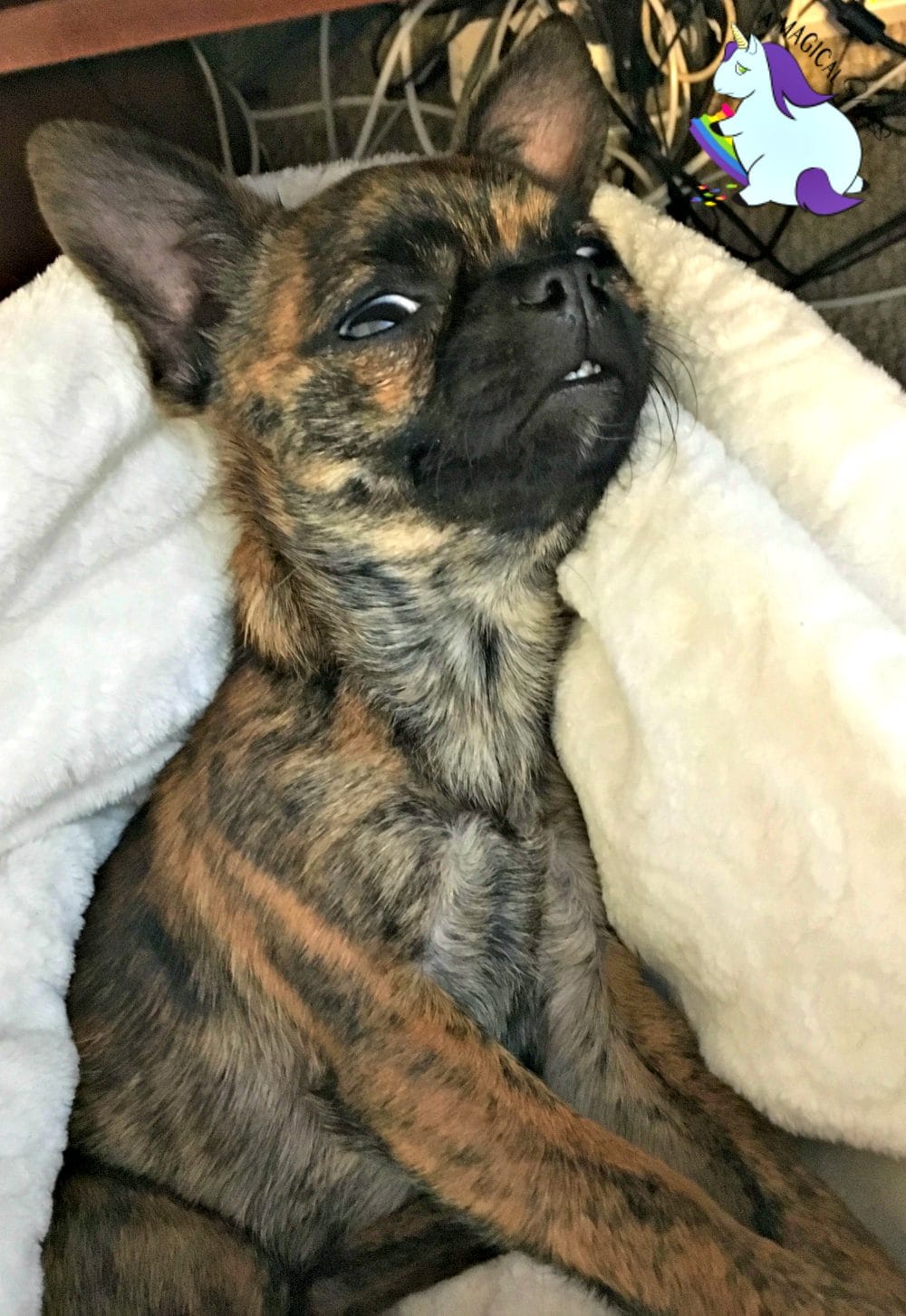 Have you ever had something fall so serendipitously into place that you can only think, WHOA?

That’s a bit how adopting our little Bea went down. Before I get into the story, Bea is our new chihuahua pug mix dog that we adopted on April 6, 2017.

I can’t believe it’s taken me so long to write about her, but we’ve been enjoying the heck out of her.

After we had said goodbye to our Hilo in October 2016, we went through a wide range of emotions about adding a third dog.

As anyone who’s lost a dear pet knows, there’s no replacing that animal, but there’s also the urge to fill a void.

At first, Mike wanted a large dog since Hilo was our big guy that mostly followed him around. Then we decided to just stick with two for a while.

The house was easier keep clean, there was less fur, and everything was just a bit calmer than when we had three dogs.

Then, of course, I got the bug. Most women get baby fever; I get puppy fever.

Mike no longer wanted a big dog due to the size of our house. I craved a little one to hold.

Our other littler two awkwardly allow me to hold them for a hot minute.

I started to ask Mike if could start looking. He brushed me off.

I convinced my sister to go hold puppies at the pet store. (This is a horrible idea good for masochists only — don’t do it.)

I could write another entire post about the horror show that is the pet shop. I felt like I was being sold a car, not a living creature.

After a couple more weeks of me mentioning it here and there, Mike suddenly said, “If you want another dog, I am fine with it, but try to find similar to The Grump.”

Grump’s our Pug/Boston Terrier mix who’s basically the perfect specimen. He has the perfect fur that neither of us is at all allergic too, he’s hilarious, calm, and ideal for our household.

Now, I know that each animal is unique no matter what the breed, but we also know a bit about which breed goes best with our lifestyle.

About four seconds after Mike gave me the go ahead; I was on Adopt-a-Pet.com. It wasn’t long that “Lil Bit” popped up – a Pug/Boston Terrier mix.

No way. Only it said she was 6.5 pounds and nine months old. The Grump is 25 pounds.

That seemed strange, but her face was so flipping cute, I had to see her.

She was brand new to the shelter, so she wasn’t allowed visitors for a few days.

I filled out the shelter’s application and tried to put it out of my mind and not get my hopes up.

My mom happened to see her on there, too and said she looked like an animal made for us.

A day later I called, and they said I was approved. They said there had been a bit of interest for Lil Bit so it would be a first-come-first-dibs sort of thing.

WHAT? The shelter requires everyone in your household to go with – humans and pets.

That made me nervous only because Franklin has horrible anxiety around people – not dogs.

The shelter is 3 hours away from us. OMG. Still not getting my hopes up. Maybe this is stupid anyway…

Mike got a call that he was off work the day Lil Bit was first allowed visitors.

I found out that she was transported from a high kill shelter in Kentucky. She was surrendered because her owner died.

THAT’S IT! I NEED THIS ANIMAL. So much for “not getting my hopes up.”

I had a pull like no other that she had to be mine. However, I was still trying to keep my cool.

Mike had his own thought process going on cause he suddenly said, “So, I’ll get there at like 6 am and park in the parking lot, and then you can meet me there at 10 am when they open.”

You know, like we’re camped out for a Black Friday sale? But, that’s one of the many reasons I freaking love my husband.

We left nice and early, but not that early. We arrived in the shelter’s parking lot at 9:30 and they open at 10.

I saw people in there, so I went in. They said I could sign in, but I still wasn’t considered “first” until no one else showed at the exact opening time.

WHAT IN THE WORLD? If someone else showed, they would have to pull our applications and see who applied first.

Did they not care that we were THE BEST CHOICE? (LOL, I am not biased or anything.) (Also, I don’t blame the shelter – I know they need rules in place.)

Finally, after staring down every car that pulled into the lot, I bolted into the building at 9:59.

They finally brought her out, and she was the tiniest little creature. She looked massive in her picture compared to real life.

She was shaking like a leaf, and it took a minute to get her to want to come by me. Once she did, she melted into my arms, and I was a goner.

A girl from the shelter (sorry, I forgot all the humans’ names during all of this) took us all outside to meet our two dogs and one human in the car.

Franklin behaved enough to pass the test or whatever. The Grump came back into the building with me since he was pretty unfazed by it all.

I asked if they knew anything else about her breed cause she was clearly too small to be part Boston Terrier.

They said chihuahua pug mix was a better guess than pug Boston. That made a lot more sense to me.

She started sneezing quite a bit, and they said she had a respiratory infection (more on that later).

They also didn’t spay her since she was sick. They said I could leave her there (???) until she could be spayed, foster her until we could bring her back for it, or pay on my own to have my vet do it. Option 3 — give me this dog!

Needless to say, we made it all official. After the 3 hour trek home, I brought her straight to our vet.

Our wonderful vet, Dr. Dahl, agreed with the chihuahua pug mix guess, weighed her in at 5.6 pounds, and predicted that she would rule the house. She nailed it on that one because she runs this joint like a mini mob boss.

All of the animals get along fabulously.

She’s even softened Franklin up a bit. He doesn’t even seem as tense anymore!

We renamed her Bea although, Mike calls her “Bits,” and she’s the most amazing.

She’s so tiny, yet fearless and fierce, super cuddly, hilarious, and just everything we needed to fill our house with even more joy.

I am so grateful that the stars aligned on this one.

Looking back, so many things fell into place to make this happen.

I don’t know, maybe I’m overthinking it all, but the timing of everything made it another day that taught me about faith.

It’s the perfect match since I work from home. Bea hates to be left alone, so on my lap she sits every day while I work.

She adores Mike and has the ability to turn my big manly husband into a giant mush ball. Happiness all around!

Update: We are doing a dog DNA test to see which breeds she really is. Not that it matters, but we’re curious!

Here are the DNA test results!! What a shocker!

Another update: The name, Bea, did not stick at all. I thought it would be a cute “little old lady” name, but Mike hated it. We switched it back to Little Bits, and call her that plus a variety of different names. Does anyone call their dog by their given name? LOL

Dogs are great animals and are known to be a human's best friend. Congratulations on making this marvelous decision.

I am so glad they are safe now, they are so adorable. I did several tile jobs for someone who went out and rescued Greyhounds, so I seen what they go through when they bring a rescued one home, once they are at a home.

She is so adorable, I love her coloring.

It is the hardest thing in the world to lose a loving pet. But the happiest thing is to adopt another! Bea is just precious and adorable and congrats enjoy her!!